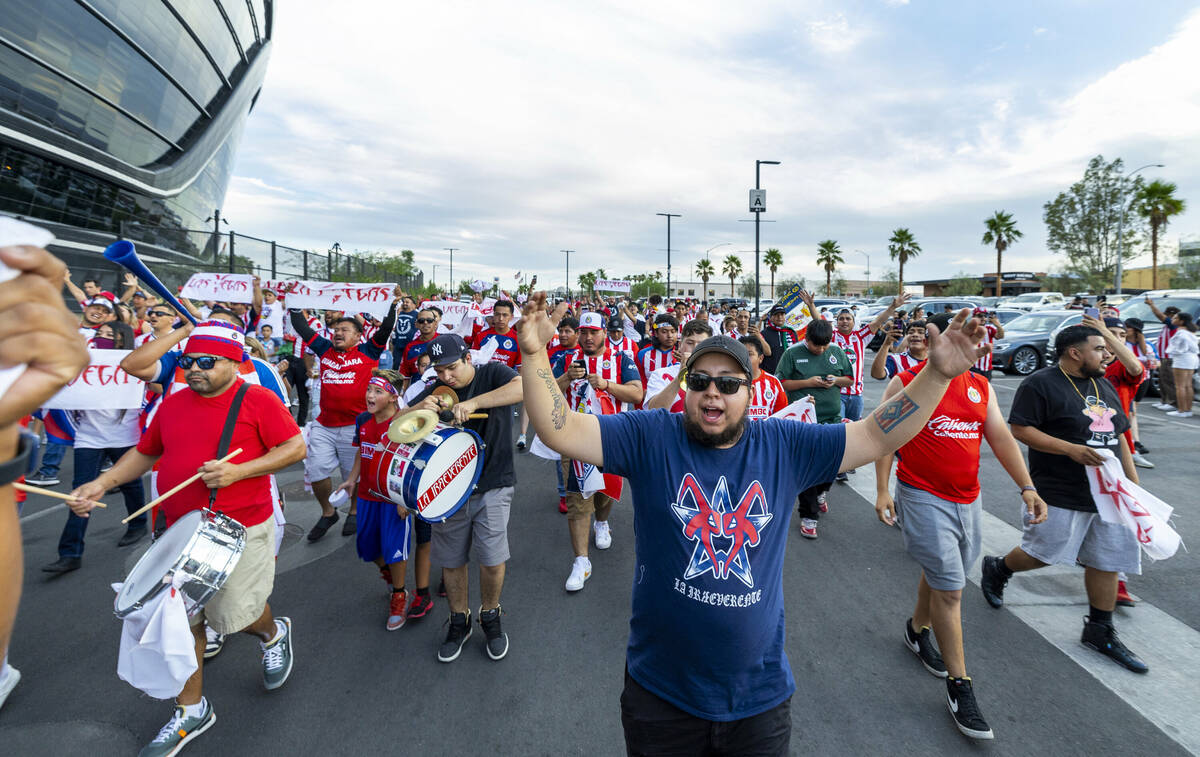 It’s around 110 degrees outside nearly two hours before kick-off between Juventus and Chivas Guadalajara at the Allegiant Stadium.

Standing in front of his Lot C grill, with a blue apron over his red and white Guadalajara shirt and a straw hat adorned with a Chivas ribbon, Simon Garcia doesn’t seem to care. “We are Chivas,” Garcia said. “We have to support the team.

A regular tailgater at Raiders matches, Garcia was one of 31,261 fans who came to see Chivas take on Serie A giants Juventus at the Allegiant Stadium as part of the Soccer Champions Tour 2022. Juventus won 2-0 after scored goals in the 10th and 80th minutes.

Garcia has been a fan since 1986 and watched them play in Guadalajara, Los Angeles and even Las Vegas, when the team faced Liga MX rivals Club America at Sam Boyd Stadium in 2013. As he speaks, the aroma of the carne asada he cooks wafts through. in the air, accompanied by the music from the radio of his truck. It also has a cooler, fully stocked with beer and Gatorade.

He’s here, in full Chivas gear, because he wanted to show off the atmosphere around the Allegiant Stadium. Garcia had hoped that Las Vegas would be named host city for the next 2026 World Cup, which will be jointly hosted by the United States, Mexico and Canada. However, Las Vegas was not selected as one of the 11 US host cities.

“It’s one of the best stadiums in all of the United States,” Garcia said. “Again, we should have had a World Cup here.”

“After they see tonight, we will have a World Cup.”

While waiting outside the southwest entrance, Lesly Arias, Joanny “Gio” Hernandez, John Rodriguez, Stephanie Rodriguez, and Jose Rodriguez await the start of the game. Hailing from Las Vegas, they wear Chivas clothes – all but Hernandez, who wears a Juventus jersey.

Hernandez doesn’t seem too phased. He says Arias has promised to buy his tickets for the El Clasico game between Real Madrid and FC Barcelona tomorrow if Juventus win tonight.

Friday is the first time Hernandez has seen Juventus play in person, but he is disappointed not to see his favorite player, Argentine attacking midfielder Paulo Dybala, who recently left for Roma.

His friends quickly offer to buy him a Chivas jersey to replace the Juventus one, but Hernandez swears that the Turin club will win, even without Dybala.

For John Rodriguez though, his love for Chivas goes beyond any player. Guadalajara is famous for its policy of only playing Mexicans, and Rodriguez thinks that makes them extremely special.

“If it’s a team in Mexico, you have to stick with your tradition,” he said.

While the majority of fans present on Friday donned Chivas jerseys, many Juventus fans made the trip to see their team play. Gabriele Gargano is from Las Vegas and celebrated his ninth birthday by going to the game.

Most of his family members are Inter Milan fans, but Gabriele and his uncle, Giovanni Gargano, both love Juventus. Giovanni flew in from Rome and arrived in Las Vegas about a week ago, mainly for his nephew’s birthday, but also partly to watch Juventus.

Friday was also the first time Gabriele watched the 36-time Serie A champions play in person. The Garganos tried to see Juventus when they arrived at Harry Reid International Airport, but it was too crowded. However, Gabriele was still excited for the game, especially for the debut of France’s World Cup winner Paul Pogba.

“He’s a good person,” said Gabriele Gargano. “This is what we need in our world.”

The Garganos didn’t have to wait long to be rewarded. Just 10 minutes into the game, Juventus striker Marco Da Graca capitalized on a rush on goal to send the ball into the net from close range for an early 1-0 lead.

Chivas had a few chances to equalize the score, including an indirect free kick from inside the penalty area, but Juventus sealed the game late. An 80th-minute counterattack saw a deflected shot fall on Italy midfielder Mattia Compagnon, who remained calm and fired a shot from around 15 yards, sealing the game for Juventus.