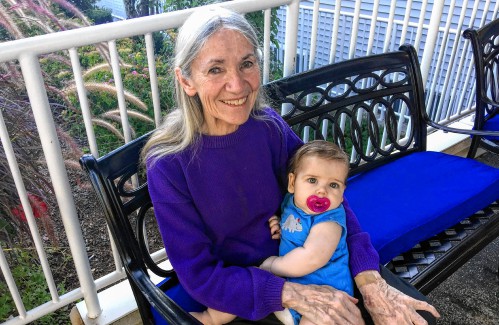 Claire Ebel, who died of dementia earlier this month at the age of 79, was full of surprises.

Ebel leaned heavily to the left, valuing many progressive ideas and causes. Preventing LGBTQ students from going to their proms never appealed to him.

Yet his passion for fair play, justice and consistency – three creeds that were etched in his heart – outweighed his feelings about the KKK and the addition of tougher sentences for hate crimes or targeting victims based on social or racial demographics.

This is how we will remember her. By most.

“She once told me, ‘When I die, (the NHCLU) is going to use me as a fundraiser and just put my body on display,'” said Malia Ebel of Sunapee, Claire’s only daughter. “Everyone knows her as a former director, but that was just a chapter in her life. Most people think of her as that person.

Malia, the librarian at Colby-Sawyer College, didn’t know much. She was crystal clear on some backgrounds. Important context. But other aspects of her mother’s life were more private, like Claire’s key role in the Democratic presidential campaigns of Robert Kennedy in 1968 and George McGovern in 1972. Or even the cancer she was battling, news that surfaced after she had already been operated on.

So many surprises, in fact, from a stoic New Englander born in Melrose, Mass., who worked as a corporate lawyer in Boston and kept a lot of things close at hand. She was small, but frank.

“She was tough,” Malia said, “and she expected her kids to be tough, and sometimes that was tough.”

She led the NHCLU for 31 years, retiring in 2013. Prior to her departure, Claire ensured that her organization remained independent of the bureaucratic and administrative hurdles she anticipated from national headquarters. She never talked about it much.

“Despite being the smartest person in the room, she didn’t come across that way,” family friend Jean Boulter of Bow said. “She never talked much about what she was doing at work and what was going on in the world. She was private.

According to Malia, her mother sang like a bird and performed with a local folk group. She listened to hippie music in the 1960s and loved to sing along to whatever was playing on the car radio. And she once supported John Denver in Hawaii, before he was John Denver.

She loved dogs more than most, got a master’s degree in economics and would be ecstatic these days playing the Boston Celtics, one of the favorites to win the NBA title.

She loved Larry Bird and his simple, unassuming ways, loved the “ugly sweater guy, not a tailored suit guy”.

“When there were playoff games and she had to be somewhere, she would bring one of these little portable TVs,” Malia continued. “I once took a class trip to the beach and she brought her little TV because the Celtics were on.”

His pet peeve? Whining, which was driving her crazy. She thought that Ted Cruz, a Republican senator from Texas, whined a lot, and she never hid the fact that she didn’t like him.

His political roles in two presidential campaigns were invaluable, but Malia and her brother, Brian, never really knew the details. Her ex-husband, Robert, who lives in Washington, DC, accompanied her on both trips and kept a diary.

He wrote that Claire’s role in Kennedy’s campaign was vital. She worked at his headquarters in Indiana and was the only staffer not to give Kennedy a glowing report on his chances in that state’s primary.

“She was an outlier,” Robert Ebel wrote in his diary 54 years ago. Claire told Bobby Kennedy “winning was far, far from a sure thing”.

“She’s done everything,” Robert continued, “from fundraising to opening and running a corporate headquarters in downtown Lafayette, Indiana to organizing door-to-door door-to-door throughout the county.”

Kennedy’s assassination two months later, in June 1968, had a profound impact on Claire. “She was really devastated by his death,” Malia said. “She thought he was America’s last chance to be equal and just.”

Of course, Claire never mentioned the inner workings of the campaign to anyone. She never hinted at how important her job was. At least not right away.

“I was really surprised by his work on the Kennedy campaign,” Malia said.

Years later, Claire took the reins of the NHCLU and began to build her reputation.

“There aren’t many non-lawyers who understand the legal system and the constitution as well as Claire does,” said former Executive Council member Andru Volinsky, now a professor at Franklin Pierce University. “She did the legislative work almost on her own.”

Devon Chaffee, the current NHCLU Director, added, “For more than 30 years, Claire Ebel has fearlessly and passionately defended the civil liberties of every Granite Stater – something for which we are immensely grateful every day.”

Later, Claire mentioned her fear of dementia. She had seen her mother destroyed by this and told her children that if she started to show any signs, bring her back and shoot her.

These signs started about four years ago. Claire hated going to the doctors, but had no choice this time. When asked to name some animals, as many as she could, in testing, Claire answered birds and dogs and “many others.”

“She was always trying to cover it up,” Malia said.

Eventually, Claire forgot names, didn’t recognize her friends and family, and grew angry with her son, Brian, who moved from California two years ago to help care for her. She died on April 8. She got her wish to die at home with her loved ones by her side.

There was also the episode of breast cancer in 2004, perhaps the best example of Claire’s tendency to keep things to herself.

Ten weeks after her diagnosis, she was operated on and no one knew yet. It was a shock that no one saw coming.

When told that Claire had cancer and had already had surgery, Malia replied, “Are you planning on telling me one day? “Not if I could have opened that window,” Claire said.

“And she had cooked a Thanksgiving turkey that morning before I got there,” Malia said this week. “It was as if nothing had happened.”