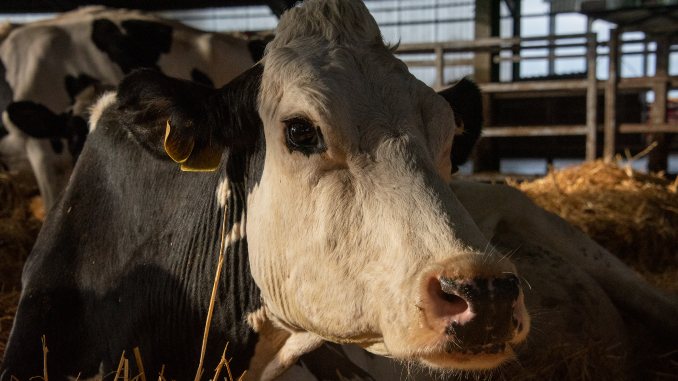 Andrea Arnold’s first film in six years is a distinct departure for the English filmmaker, the free but deeply disturbing Cow. Following his 2016 road trip American honey, the director’s foray into the documentary is imbued with a violent monotony that disarms and worries at the same time. It’s completely devoid of dialogue, capturing the daily routine of a dairy cow and her calf through a devastating truth. There’s no text or voice-over narration to sway viewer sympathies, opting instead to convey the sorry reality of cattle existence through candid and unbiased observation. Successfully communicating the tedious torture of having one’s body mined for its resources, the film is thoroughly immersive, even if its “how the sausage is made” approach isn’t necessarily revealing. However, Arnold’s aesthetic eye (and ear) permeates Cow with a clear message, condemning the exploitation of animals to satisfy human cravings.


Cow could closely follow two specific cattle – a dairy cow named Luma and the calf she delivers on screen – but this is less a portrait of these animals than a detailed account of the cyclical process of dairy farming. The two “ladies”, as peripheral farm workers often call them, illustrate the two poles of a dairy cow’s lifespan: the two-year period before a cow can reproduce, followed by continued existence gestation, birth and lactation. until death. Although the film never emphasizes this fact, it is essential to understand that the life expectancy of a dairy cow extends from two to six years in one of these operations, but that it can live healthily until 20 years old if she is not subjected to this constant trafficking process. .

It’s profoundly clear why Arnold was drawn to the striking Luma above all other potential subjects, as she sports a beautiful Rorschach-esque patch on her wide nose reminiscent of the image of a butterfly. This symbol perfectly encapsulates both the shortness of a dairy cow’s life and the gradual (if painful) evolution it undergoes. Cow divides her time between observing Luma and following her little one as it grows – after spending the first night after birth together, Luma and her baby are separated for good. The calf is tagged, disbudded with a cautery iron and fed milk from artificial teats. Luma is milked, raised and impregnated once again. In particular, given the repetitive buzz of Luma’s existence, there are some parallels to that of Chantal Akerman. Jeanne Dielmanndocumenting the minute and compounding traumas of female (albeit non-human) existence.

While Cow doesn’t overtly platform the director’s personal position through the film’s narrative, Arnold is able to make pointed statements through musical cues. Kali Uchis’ “Tyrant” plays cheekily as Luma is locked in a pen and ridden by a bull; Angel Olsen’s ‘Unfucktheworld’ slips out of a dairy farmer’s personal loudspeaker as cattle are herded indoors for the night; Garbage’s grunge tune, “Milk,” sets crescendos over the film’s final scene: Luma’s daughter sprinting through green pastures with her feuding sisters, the dread-sick viewer knowing full well that the fate of her mother is expecting him soon. Arnold is well versed in the art of using a needle drop to deliver a punch, a skill she showcases (and leans heavily on) with Cow. In a film with no dialogue, elaborate shots, or larger narrative context, these musical moments are often the only time we get a glimpse of the director’s own feelings about what’s being portrayed onscreen. Featuring only female-identifying singers (with often melancholic lyrics), these songs lament a sadness and exploitation intrinsic to femininity. The same vein of violation perpetuated against these animals, trapped in a brutal web of (re)production, literally milked dry and discarded when they no longer serve human needs.

Yet apart from the music, whether diegetic or soundtrack, there seems to be absolutely no intervention from Arnold. She’s so entrenched in the muddy, metal paddocks of the farm that Luma often bumps into her camera (obviously a product of that cow’s clumsy curiosity rather than the director cluttering her subject). These moments are often shocking, but effectively, it allows Luma to directly interact with the filming process, almost breaking through cinematic barriers and crossing the screen. This is contrasted beautifully by Arnold’s static shots of Luma, often capturing his innocent black-eyed look. Confronting the public with her gaze, we project onto her our darkest human emotions: Depression, rage, pain, heartache. Realistically, all Luma feels is animal instinct, but that doesn’t make his suffering any nobler. By connecting with Luma, we experience the callousness of an industry that exploits bodily resources for our consumption, a reality that is only nauseating when audiences take the time to engage with the necessary work. to supply its products.

In this direction, Cow follows in the footsteps of recent films like Viktor Kossakovsky’s similar pig study Gunda– however, Arnold is a bit more deliberate in his juxtaposition of farmers and their cattle. Gunda saves almost all human interference for the very end of the film, emphasizing the utopian image of a pig and its offspring until the humans rip the piglets from their mother’s teat. In Cow, human interaction is a constant. Farmhands are the first entities calves see when they emerge from the womb, humans use their own bodies to guide cattle to their milking stations, and human implements quickly transport cattle out of this deadly reel.

Succeed in getting your message across, Cow would still benefit from a few crumbs of context if he wanted to point out how unsustainable cattle farming is in its many iterations. They emit dangerous levels of methane (a greenhouse gas that accelerates global warming), and it should be noted that reducing personal consumption of beef and milk would indeed reduce global greenhouse gas emissions. . At the film’s climax, however, reasonable persuasion is far from necessary. Cow teases true interspecies attachment before coldly demonstrating our deadly control over these creatures. That’s not to say the film is relentlessly scary – though his life is short, Luma spends happy summers grazing fresh grass and sleeping under the purple-hued starlight, an enchanting vision of natural beauty. which is discouraged in its slippery impermanence. Shot over several years, the director’s camera achieves a comforting familiarity with Luma and her cub, making their plight all the more difficult to digest. A passive but passionate feat of cinema, Arnold’s latest fits perfectly into his existing filmography, depicting the depraved livelihoods of those who are exploited for the financial gain of others.


Natalia Keogan is a freelance screenwriter based in Queens, New York. His work has been featured in Filmmaker Magazine, Paste Magazine, and Blood Knife Magazine, among others. Find her on Twitter @nataliakeogan