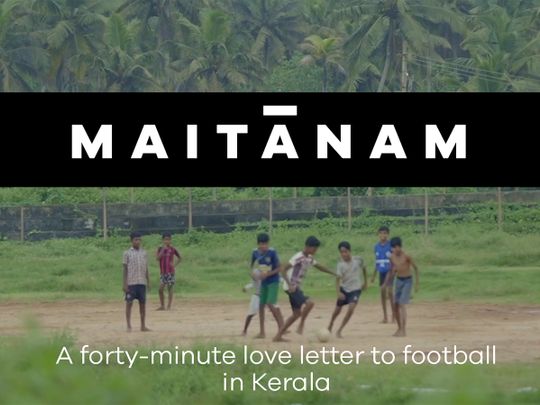 Kolkata: Kerala, where football is a way of life in India, now enjoys a prominent place in the form of “Maitanam”, a 40-minute documentary part of the package on Fifa+ – the new digital streaming platform of the world’s governing body of the game in the year of the FIFA World Cup. The film was produced by RISE Worldwide, the sports marketing arm of Reliance Group, owners of the IPL Mumbai Indians franchise.

Maitanam, the Malayalam word which literally means ‘ground’ or by extension, stadium, is an ode to the coastal state’s passion and attempts to capture its people’s love for sport – featuring six inspirational stories from the state . The timing of the documentary’s release seems perfect with the state – which has given India an assembly line of stars like IMVijayan, Jo Paul Ancheri, CV Pappachan and VPSathyan, became Santosh Trophy champion on Monday.

From the state capital Thiruvananthapuram in the far south to the commercial capital Kochi to the cultural capital Thrissur – the documentary covers various terrains, encountering priests who play barefoot, a women’s team making waves in competitions abroad, little girls who train with nonagenarians; and a fascinating football commentator whose passion for the game shows in every laughter and anecdote about the game of football in the state of Kerala.

Commenting on the documentary, Andrew Whitelaw, Editor and Head of APAC Content, Fifa+ said in a statement: “We are pleased to partner with RISE Worldwide as we enter the Indian market with Maitanam, a docu-film on the football set in the football-loving state of Kerala. Fifa+ Originals reaches millions of sports fans around the world. These films cast unique perspectives on how football is played across geographies and cultures and the place the game commands in the hearts of fans.

James Rego, Head of Broadcast and Production, RISE Worldwide said: “We are grateful to Fifa for extending this opportunity to show the passion of football in parts of India. We are humbled and privileged to bring the extraordinary influence of football to the local pitches and lanes of Kerala to the world in our documentary.

“We are very pleased to partner with Fifa+ and look forward to showcasing our production expertise as we connect with billions of football fans across the world. This film marks India’s first step in the multilingual storytelling of Indigenous football.