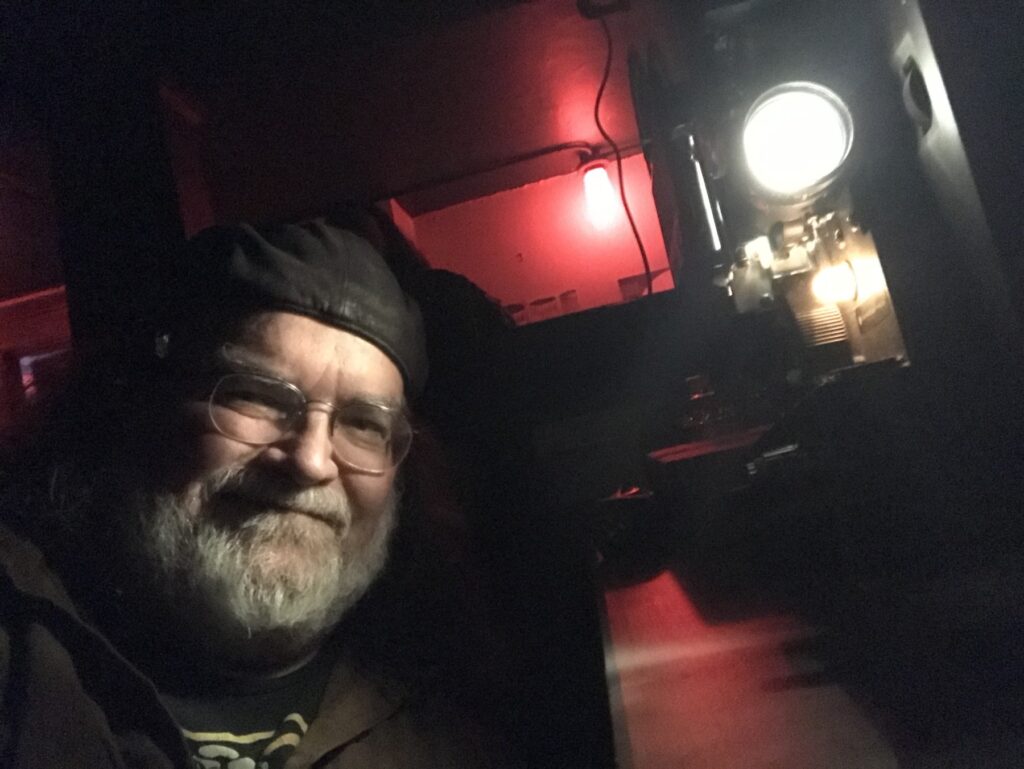 Greg Hamilton’s passion for the quirky

For those who frequent Portland’s independent film scene, Greg Hamilton is a familiar sight. Whether he’s hosting an event he’s scheduled or just supporting his local theaters, his bearded, beret-wearing, bespectacled face is hard to miss. He is one of those unsung heroes of the city’s moviegoers, always eager to share his passion for the quirky.

Hamilton has been compiling and showing collections of obscure 16mm films for years and has a few upcoming screenings in the coming weeks. On July 5, he will host a revival screening of his special Psychotronic Afterschool program at the Clinton Street Theater. And on August 1, it will debut an all-new selection of surreal and ostensibly educational shorts at the Hollywood Theater. I got to sample a few of the latter during a visit to the underground lair where Hamilton cooks up his bizarre strategies, i.e. his basement. I also had the chance to explore the origin story of someone who embodies cinephilia in all its tangible glory. (Questions and answers have of course been edited for length and clarity.)

What made you a cinephile?

I’m originally from Portlander and was first exposed to movies when we were visiting my grandparents in the house my family and I now live in. During the summer of the 1980s, my grandfather took me to the cinema. We saw all kinds of trash. And amazing things. But that was the key for me, as far as the love of cinema goes.

What theaters do you remember?

I remember going to see movies at the Roseway, and at Baghdad before it was taken over by McMenamins. We went to many neighborhood theaters, some of which have just disappeared. There was one called the Southridge, I believe; it was near Milwaukie. And I have memories of Hollywood, which at the time was really cheap. Grandpa and grandson could get in for two dollars. This was before the renovations. He was in poor condition.

When did the idea of ​​collecting old 16mm prints germinate?

I started collecting 16mm films because I was going to see by Dennis Nyback shows. I really liked their freshness and all the things he managed to find and show. Whenever he was in town, I made it a point to go see one of his shows. I heard of a sale of what was left in the Portland Public School District collection. So, I went to buy whatever was left, coming home with more movies than my wife was happy with. The thing that drew me in [showing the films publicly] was movie trailers. I bought some trailers from a guy, and I thought it would be fun to expose people to movies they had never heard of, so I started this show called trailermania at the Clinton Street Theater around 2004. I ended up doing about ten show programs, each a little over an hour. I would introduce it and give everyone who was there a little program of all the trailers, so if they wanted to go to Movie Madness and find out what this weird Burt Reynolds movie was all about, they could.

And then you started hosting and organizing other kinds of movie-related events.

When Hunter S. Thompson died, I showed Fear and Loathing in Las Vegas and a few other things. For many years, I honored Martin Luther King, Jr. at the Clinton each year; I would bring a bunch of educational films about Dr. King and give people the opportunity to see them.

You’ve also had a long-standing connection to the films and family of legendary documentarian Les Blank (Burden of dreams, garlic is as good as ten mothers).

I didn’t go looking for Les, he kind of found me. I was at the library and found this documentary called Always for fun, which is his play on New Orleans and Mardi Gras. After driving him home, I realized I wanted to see all of this man’s movies. Thanks to the Multnomah County Library, I was able to access many of them.

I really reacted to his cinema. He just points the camera and observes. Sometimes it’s for periods of time that seem too long, but there’s always something at the end of the plan that makes sense. There is this organic interaction that takes place in his cinema, which is not necessarily unique. There are a lot of filmmakers who have done similar things, but I think his relationship with his subject, his observing eye, is so full of joy.

There is a link between your relationship with Les Blank and the subject of the short film you made, You don’t have to tailgate.

I had a lot of different ties to the art car community here in Portland, and while I was researching Les, I learned that his son Harrod had made two films about art cars. So, I took Harrod to Portland and rounded up all the art cars in the area for this kind of organic shindig. I spoke to Harrod before I spoke to Les, and Les didn’t stay long after that, unfortunately. I never met him in person, but I spoke with him on the phone and stayed in touch. It was kind of an awkward moment, because he knew he was heading south. [Blank died in 2013.] Harrod invited me to Les’s celebration of life at Berkeley, and it was amazing. The people associated with Les ran the gamut. There was a second line in New Orleans, and Werner Herzog was there, talking about what a Les filmmaker was. It was quite an experience.

After going to Les’s party, I decided to become his lawyer. I said to myself that I was going to show all his films in Portland. And we did. We showed them all. So now we loop through them.

The screenings you organize, both of Les’s films and others, feel like very organic community events.

I wanted to embrace the spirit of what Les would do, so for example I will bring food. For a Mardi Gras show, I’ll cook jambalaya, okra, royal cake. Back to the pre-COVID era…

These are exactly the kinds of experiences we stand to lose if people stop going to the movies.

I’m here with you. Especially in a film community like Portland’s, where there’s been such an explosion of screenings and events that thrive on the films themselves. We are spoiled that way. So not having it for quite a while has been sad. Just before COVID hit I had John Dahl here for screenings of western red rockand things stopped right after that.

So that brings us to the present. Now that the cinemas have reopened, are you busier than ever?

This year I’m on board about 12 events, many of them at the Clinton Street Theater as the recent change in ownership has opened up the schedule somewhat. The show I host there on July 5th is something I have about five episodes of. It’s a combination of nostalgia but also of meaning. I choose things because there is a purpose to what I do. Sometimes I resonate with a story being told.

In other words: make no mistake, this is not a random collection of cinematic trash. It is a specific program of movies in a specific order, designed to elicit a specific response.

It’s like when I was doing the trailer programs. I would put up a bunch of trailers, look at the titles and start putting them in their place. Maybe a few westerns, and the second one has John Wayne in it, which leads to McQ, and then you have more transitions, maybe connected by actor or director, going in and out of genres. The psychotronic show is a creative exercise for me, and it’s fun to share because people get the jokes. They see what is happening.

What are your main sources of acquisition of new films currently?

I found different communities that trade and sell, and of course there’s eBay, which is a great hub for hardware. But I’m much more selective now. I appreciate the most obscure, the most invisible, ideally with humor. There’s a lot of stuff there that’s ‘educational’, but it’s subversive. I have one called Jesus and the vegetable peoplewhich unfortunately does not quite bear its name.

Some of these things, however, involve people with recognizable names. One of the Clinton Street program titles features Wallace Shawn, for example.

There are a lot of well-known actors, character actors in particular, who have done after-school specials and other stuff for the kids market. Scott Baio likes these things; I think he was in every anti-drug movie made. Stoned was the centerpiece of my 4/20 show a few years ago.

What are the most unexpected discoveries you have made?

I picked up a stash from a friend who couldn’t take care of his collection anymore and wanted to empty his garage. I took everything he had and started sorting it out. I found one called Morris goes to school, and it’s a stop-motion animation about Morris the Moose, going to school. It’s all about this really spooky style of animation, and falls into moments of pure psychedelia. When I first watched it, I took a selfie of my mouth wide open. It’s part of the show I do at the Clinton. It’s nightmare fuel.

Another, which I could present to a limited audience, is this public service film [1978’s A Different Approach] on the employment of people with disabilities. It stars a young Michael Keaton, alongside a cast of Hollywood celebrities. He looks about 17 or 18 years old.

It’s a bit like Christmas. You find stuff all the time. Right now I have five different movies from five different directions that I’m going to be able to watch next week.

To be clear, this is a labor of love for you.

I invested a lot more than I got back. The fun factor was the catalyst. I leave the shows as they are after putting them together, despite the temptation to take them apart when I find new material. I prefer to treat them as stories, so I build a library of different experiences.