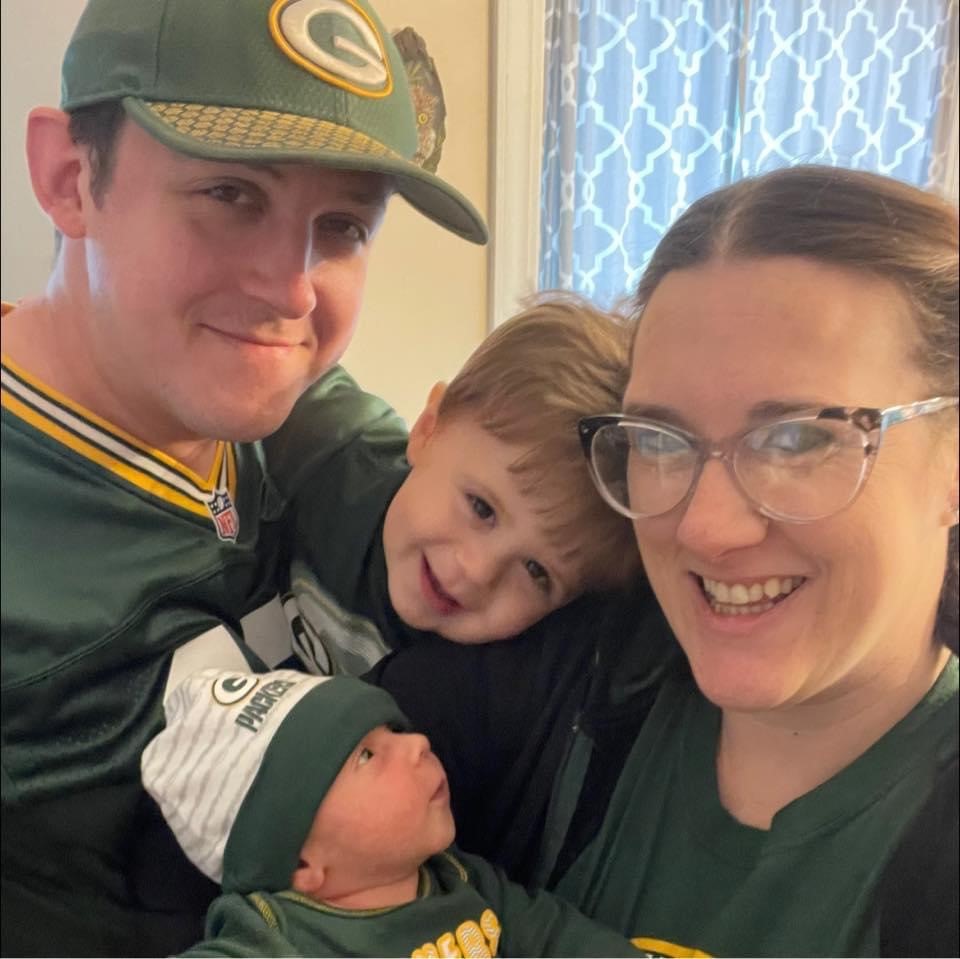 Welcome to Cheesehead Origins, an off-season series meant to present Packer fans with interesting fandom origin stories! CheeseheadTV is dedicated to Packer fans everywhere, and we want to hear (and share) your stories.

So far, most of the people I’ve featured in this segment are people I haven’t met in person. I met Big B and Mark Oldacres at a Packers game last season and shook hands with Green Bay Mayor Kyle Cousineau in Lot 1.

For the most part, however, these are people I have only interacted with or admired online.

So today’s functionality is a bit different. Not only do I know this person in real life, but I’ve known them since I was in 6th grade (even though it’s been years since our paths crossed in person).

Today I’m profiling Greg Meinholz, who I got to know through a group in middle school and high school. He was a trumpeter, I was a saxophonist, and we both had an affinity for classic rock and the Green Bay Packers.

I’ve only seen him in person once or twice since high school, but we continue to interact online, our mutual interests having grown to include craft beer (often purchased at our local Woodman’s). Today, Greg describes himself as a 35-year-old, happily married man with two sons (one two years old, the other eight months old). He works as a systems engineer (whatever that means, I’m a humanities guy) and lives in suburban Milwaukee, and, more importantly, is a huge Packers fan.

Now, Greg has been a huge Packer fan since I’ve known him, and it really goes back to when he was born. I asked him if he could name one of his earliest memories of watching the team, and his memory certainly goes back further than mine, even though he’s only a year older than me. .

“I very vaguely remember a quarterback with the number 7 on his back playing in a Packers uniform that would have been Don Majkowski when I was still figuring out what football and the Packers really were.” , said Greg. “Once my fandom went from just being entertained by this cool game on TV to really knowing what I was watching was watching Brett Favre throw touchdowns at Sterling Sharpe.”

Greg’s fandom flourished throughout childhood, and like many of us, much of it was due to the influence of immediate family members. He and his brother Jeff would watch every game together and go crazy with every big play, or lose their minds with every bad play. They also both developed a habit of picking up football cards at every opportunity.

“Each trip to the local card store was never to see if we had marked the most valuable card in the pack,” he recalls. “It was always to expand our collection of Packers cards. We didn’t care what the value was. If it was a Packers player we didn’t have, we wanted him.

For every Favre, Sharpe, Reggie White or LeRoy Butler, the Meinholz brothers would also occasionally pick up Vai Sikahema (one hell of a sweater). As long as it was a Packers card, both wanted it.

Greg’s fandom has also been significantly influenced by his father and his frequent tales of the Packers of the Lombardi years.

“I have a lot of love for former players that I wasn’t even alive to see play,” he said. “Bart Starr, Ray Nitschke, Paul Hornung, Jerry Kramer. Listening to my dad talk about the quality of those teams always made me see that era as if they were the unstoppable Packers, the greatest teams and the best players that ever made the jersey worse.

There are children who get into football more than others. For them, it goes beyond a passing interest or a game you play with your friends during recess. It becomes an obsession. I was one of those kids, and I wasn’t surprised to learn that Greg was too. During a time in the early to mid-90s when it still wasn’t completely cool in grade school to be a Packers fan (lots of supposed 49ers and Cowboys fans), Greg still proudly wore his Packers gear. Packers, and he became a source of knowledge. on the team.

“I started to notice all the kids who cared about football coming up to me and telling me about the Packers,” he said. “My name and the Packers were mentioned constantly, I memorized the 1996/1997 roster and the kids asked me about player names and numbers and I never faltered. That’s when that the kids started calling me the biggest fan. I never really thought of myself as THE biggest fan, but I started to realize that I was a lot more invested than most, and that didn’t help. not stopped since.

Over the years, there have been many moments that have stood out for Greg. The Super Bowl wins, of course. But other small moments too. Robert Brooks’ 99-yard catch on Monday Night Football against the Bears. Every Gravedigger’s Celebration by Gilbert Brown. The Aaron Rodgers Hail Mary in Detroit. Randall Cobb’s touchdown caught the Bears to clinch NFC North and a playoff berth on fourth down.

But there are also more special memories.

“Outside of playtime, I have to say the first time I put anything Packers related on my kids. For both of them, it was a little Packers hat while they were in the hospital. after they were born that sent my green and gold heart through the roof every time.”

The Packers also played a role in Greg’s marriage.

“When my wife and I got married in 2020, about half an hour after the ceremony, the Packers were scheduled to play the Vikings in the season opener. I made sure I had a TV ready to watch the game as soon as it started, and I will always remember the final score of the Packers beating the Vikings 43-34.

Greg does his best to get to the Packer games whenever he can in person, but since becoming a parent it’s gotten a lot harder (I can understand), and he hasn’t been to a game since 2018. But he’s had some great experiences in the past, managing to meet a few Packers in the process, including Paul Hornung, Willie Davis, Jerry Kramer and more.

Most of his love for the team is displayed in a Packer man cave in his house. He recently moved to a new house where his setup isn’t as big as he had in his previous house, but it’s still quite impressive. It is the result of a lifetime of collecting memories.

“My Packers man cave started in the second bedroom of my old apartment in 2011,” Greg said. “At first it was just a place where I could hang up and enjoy all the Packers autographs I had collected over the years. A friend of mine joked that it was my Man Cave, so the name stuck, and I swore I would have a bigger one when I bought a house. So two years later I bought a house and it had a nice basement with a little bar and I thought, this is it, this is where I’m going to build greatness. “

He has a ton of autographed memorabilia, many of which were from player signings and encounters. But he also sought out certain autographs just to have them in the collection.

What are the crown jewels of this collection?

“Probably the rarest or the most valuable would be signed Brett Favre and Paul Hornung shirts,” he said. “I’ve also signed photos of Bart Starr, Aaron Rodgers, Ray Nitschke, Jim Taylor, Tony Canadeo, Brett Favre, Paul Hornung, Herb Adderley, the list goes on. I love it when someone asks me if I have a certain former player and he looks at me in shock when I say “Yes” I may also be a little spoiled because when people ask me if I have a popular player from the last five years I have almost like saying ‘Please challenge me!’ haha.

As her family grew, the layout of her old home no longer worked well for having multiple small children. So he took his collection apart and was eventually able to put it back together when he moved to his new home. Check out the photos below. 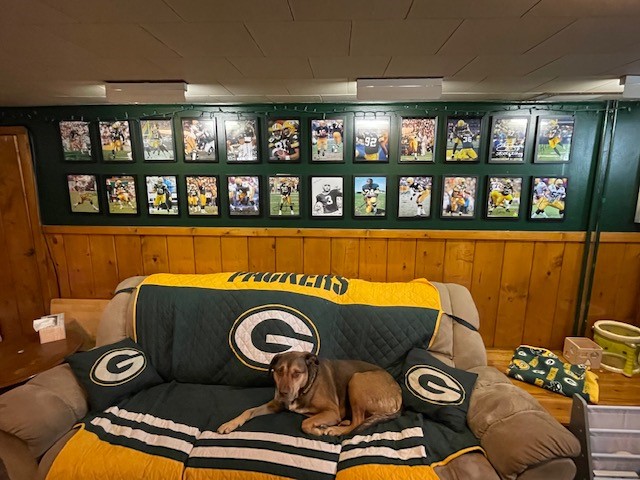 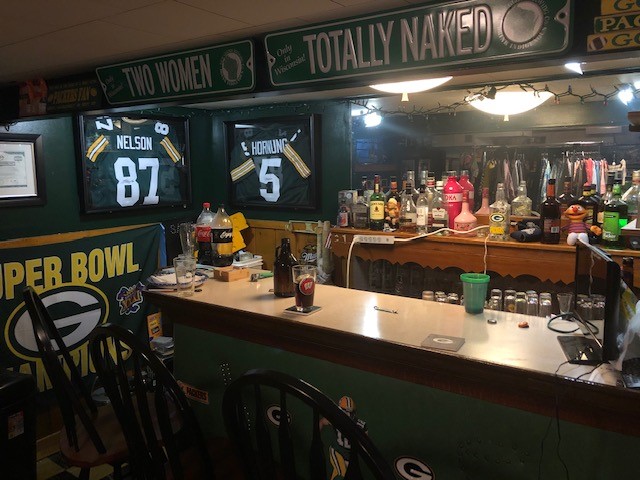 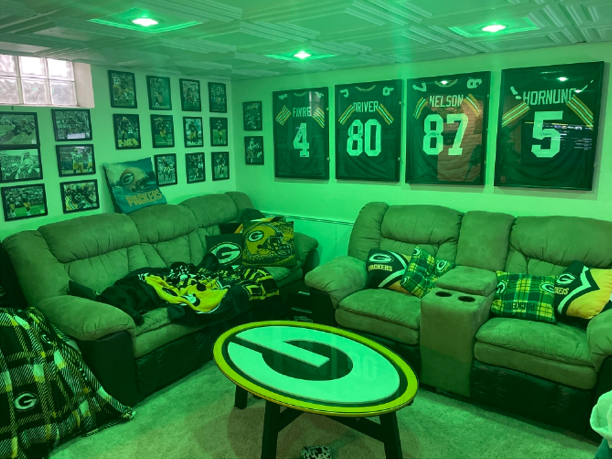 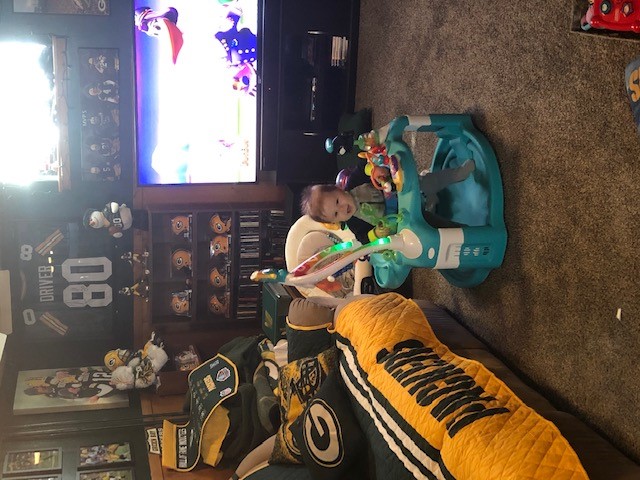 As for this year, Greg is pretty optimistic about what he sees from the Packers.

“I feel like we finally have a coach in Matt LaFleur who doesn’t just rely on Aaron Rodgers to lead us to victory,” he said. “If Rodgers has an offside, we could still win with Aaron Jones or AJ Dillon running the ball, or the defense could win us a game or two. Having Aaron Rodgers basically helps bring this team to the top. I’m obviously a bit concerned about the WR position, but only for the fact that I think we only have the guys now to get us down the field with 10-15 yard plays max, I have the feel like we still need that big WR game to open it wide or I’m afraid a good defense will suffocate us.

Thanks to Greg for his participation! You can follow him on Twitter at @gmeinholz, and sooner or later you’ll see his writings on PackersTalk.com!