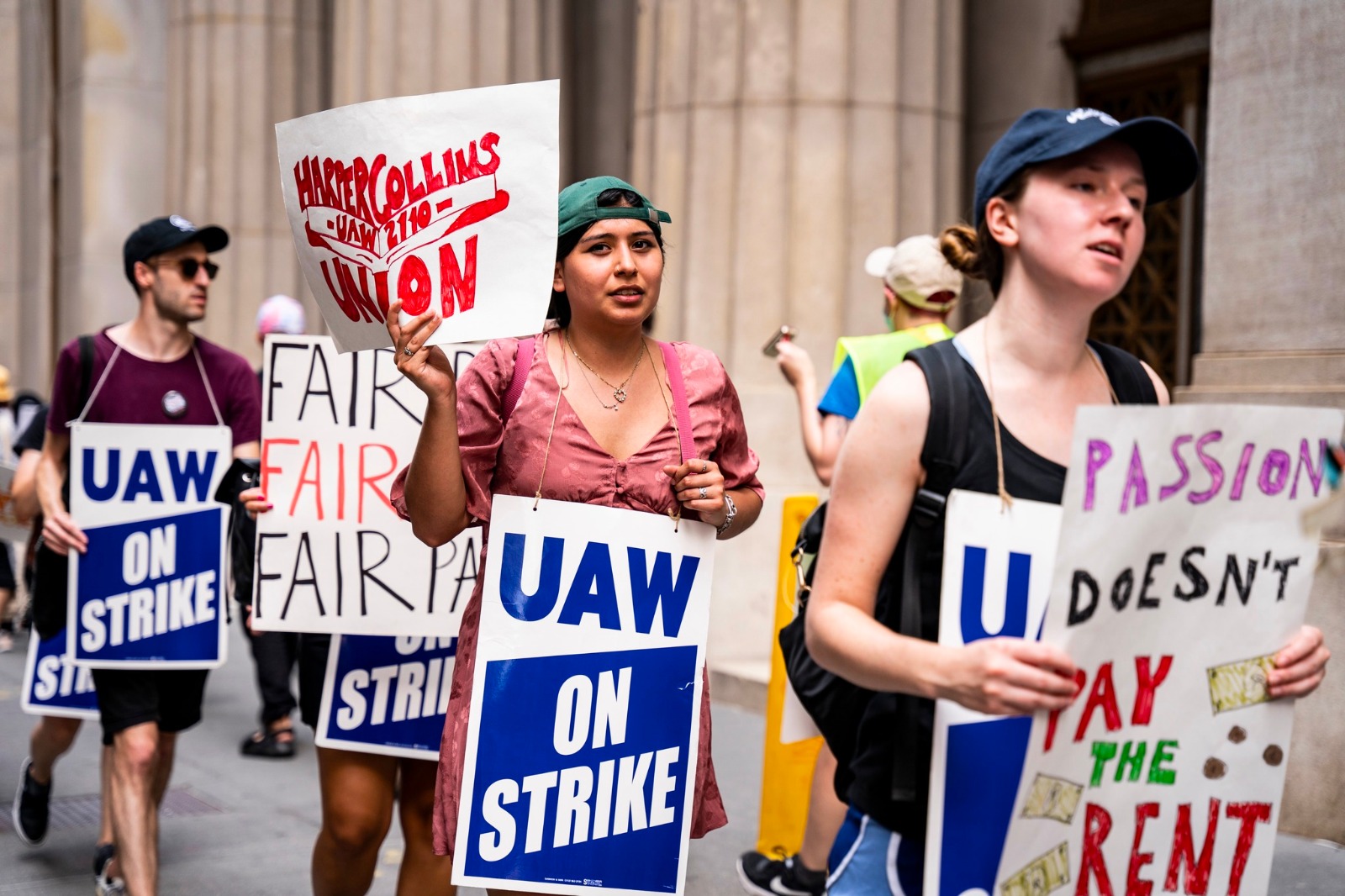 Yesterday, workers at the ‘Big Four’ publisher HarperCollins went on a one-day strike to protest the company’s refusal to accept a fair contract. The workers, who have organized with United Auto Workers Local 2110, are demanding decent wages, better family leave benefits and stronger commitments to racial equity. Even though management threatened to withhold strikers’ pay and even though temperatures approached 100 degrees, the energy of the mobile picket outside the company’s headquarters at 195 Broadway was vibrant, militant and joyful.

Of the roughly 250 unionized workers – in the company’s editorial, advertising, sales, design, marketing and legal departments – 95% took part in the strike vote, with 99% in favour.

HarperCollins, which is owned by NewsCorp, founded by Rupert Murdoch, has seen revenue rise 12% so far this year. In fact, publishing is one of the few industries to have boomed during the pandemic, and profits are higher than they were in 2019.

But full-time workers are still unable to make ends meet. Starting salaries at HarperCollins are $45,000; the average salary is $55,000. As is endemic throughout the industry, the company’s predominantly female workforce is often forced to take on freelance work or rely on family or partner income to survive. And nationally, rising inflation rates effectively cut average wages by 2.5%. The NewsCorp CEO’s salary rose 70% in 2021: He pocketed $26 million that year, while union-demanded raises would cost the company just $3 million. “In 2021, Newscorp completed share buybacks,” an employee explained. “They put the profits we made in the pockets of the shareholders. And people know that, and they’re upset about it. They want their fair share.

Worse still, workers are being urged to return to the office in one of the world’s most expensive cities, ending the pandemic remote work policy. On the @xoxopublishinggg Instagram account, where publishing workers gossip about their industries, it was reported that the company’s snack bins, touted by management as a back-to-the-office perk, were infested with maggots.

A repeated chant on the picket line was, “Passion doesn’t pay the rent!” Publishing, like other white-collar media and arts industries, relies on a specific form of exploitation to operate. To work in publishing, as all HR staff do when posting jobs online, you need to have “a passion for books”. Whenever workers are expected to accept woefully low wages, take on unachievable workloads, work outside of their appointed hours without pay, and endure abuse from authors and executives, management invokes this “passion for books.” . If you, as a worker, do not agree to these terms, then your own “passion for books” – which for many workers is central to their identity – is called into question.

If “passion” is so essential to the job, then passionate workers who care deeply about their books and their authors certainly deserve higher pay. Instead, management is using “passion” as a tactic to prevent workers from getting the wages and working conditions they deserve.

Publishing is a predominantly white industry, particularly at higher levels, and a family background of some wealth is often assumed, which perpetuates its racial barriers. Companies generally require workers to have four-year degrees and live in the country’s most expensive cities. It is not uncommon to hear management express surprise that its employees do not have financial support from their parents, or that they are not from wealthy backgrounds, and that we have “the right” to discuss money and working conditions when you have the chance to work in such a prestigious industry. In the wake of the Black Lives Matter 2020 movement, many publishers have begun making performative displays of anti-racism and effort and diversity, which are mostly for appearances. As one worker explained, HarperCollins won’t even agree to commit to interviewing a person of color for every vacancy. A sign on the picket line read, “If black lives mattered to them, they would pay them a living wage.

With young women making up the majority of staff at junior levels and more men represented at senior levels as well as among perpetrators, sexual harassment and misogyny have long been rife, which came to light in 2017 during the emergence of #MeToo and the “Shitty Media Men” List. Most of the women documenting their stories referenced the power imbalance in their workplace, which made it difficult to resist or report unwanted advances, and where the expectation of not “jeopardizing the mission” prevailed. on their own safety and well-being. Improving HR procedures will not remedy this, as they do not correct the power imbalance. On the contrary, only the collective organization of workers can fight against this type of sexual predation. There is no path to racial equity or gender equity without organized work, regardless of any “diversity initiatives” or “sexual harassment trainings” put in place by management.

The strike comes amid increased unionization across the country and a reinvigorated and increasingly militant labor movement, led primarily by young women and gay men. During the strike, CUNY PSC, Center for Reproductive Justice Union, as well as UPS Teamsters walked the picket lines with HarperCollins workers. A recently fired Starbucks employee, Austin, came out to show his solidarity, and HarpersCollins workers announced the rally for his rehiring, which will take place on Friday.

HarperCollins is the only unionized publisher of the Big Four, but in recent years workers at several other smaller publishers have also joined unions. As publishing houses reap record profits while the workers who made those profits see none, it’s time for all publishing workers to realize exactly how essential they are and refuse to accept “prestige” instead of a fair wage. “We love making books and we love spending all day around books,” said a HarperCollins worker on the picket line. “But we also know our worth and are ready to do whatever it takes to get the contract we deserve.”