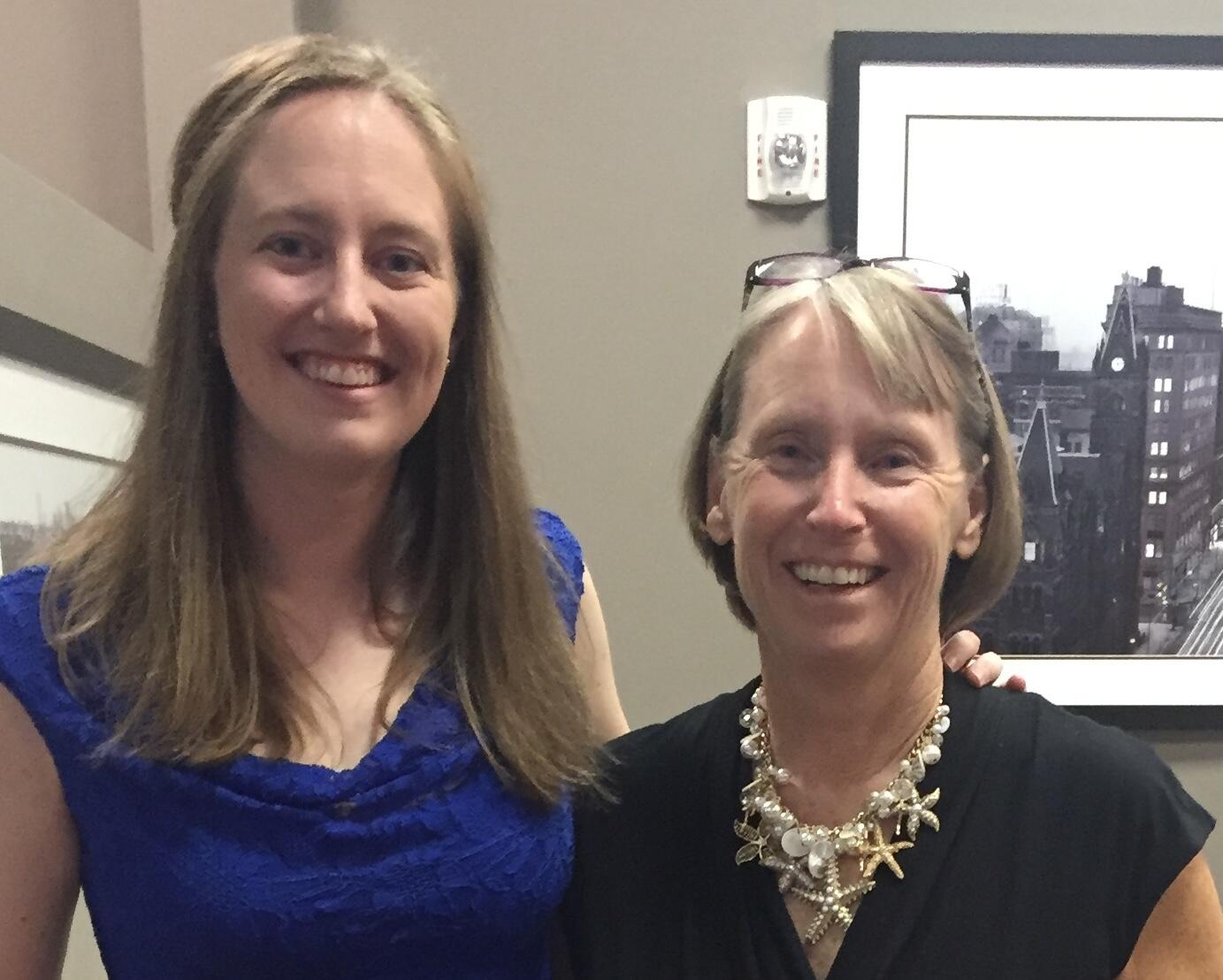 Mary Katherine Keith, MD, knew what she wanted to do with her life as early as kindergarten when she dressed up as a doctor for Career Day. His desire to enter the medical field came naturally. Her mother, Kim Keith, MD, is an emergency physician, and Mary Kat saw how her mother helped others.

“I remember growing up, we’d be at a sporting event and a classmate would get hurt and mom would come and fix it,” said Mary Kat, a 2017 graduate of Virginia Commonwealth University School of Medicine and now works at Raleigh Emergency. Medicine Associates at UNC Healthcare Rex in Raleigh and in Holly Springs, North Carolina. “A career in medicine was never imposed on me. It’s something that I really enjoyed. »

Mary Kat grew up in Kitty Hawk, North Carolina, where her mother worked at an emergency center. At the time, there were no hospitals in the Outer Banks.

“My mother identified the need for a hospital there and helped build it,” said Mary Kat.

Kim Keith, a 1986 VCU School of Medicine alumna who now works for Valley Health at Warren Memorial Hospital, Shenandoah Memorial Hospital and Hampshire Memorial Hospital in West Virginia, didn’t start thinking about medicine until high school. This interest intensified when she worked in the emergency room at Williamsburg Community Hospital during her undergraduate years at William & Mary.

“I decided to go into emergency medicine because of this experience,” Kim said, noting that she has always worked in rural hospitals. “I thought it was a career that would always challenge me.”

Their biggest challenge yet

Neither mother nor daughter realized that these challenges would include a pandemic that would not only devastate people physically but also emotionally.

Mary Kat, also an emergency physician, was working in New Orleans when the pandemic began. In March 2020, New Orleans was an epicenter of COVID-19. At the time, Orleans Parish had the highest number of deaths per capita of any county in the United States.

“I took care of our first COVID-19 patient in New Orleans. I was in the intensive care unit

rotation. It was one of the toughest challenges for me, going through the pandemic early on,” she said. “ER doctors are notorious for keeping us calm, but it was difficult because we were afraid to bring this home to our family and friends. I think not knowing was one of the biggest things we had to deal with. We were getting emails or changes every two hours. We had to adapt to new procedures and also be there for our patients.

The intensive care unit where Mary Kat worked began to fill up with people on ventilators. She and her fellow emergency physicians constantly had to update the frantic families.

“We would tell them that we are doing our best. It was the most difficult thing, to keep this behavior of an emergency doctor and to assume all that, ”said Mary Kat. “Personally, I didn’t go back to my family in Virginia for fear of reporting it to them. Mom and I had conversations about how we stay safe and don’t pass the virus on to the family.

When COVID-19 hit, Kim left her home in Winchester, Va., to avoid exposing her husband to the virus. She lived away from home for 14 months, until her husband could be vaccinated.

“I was reading updates every night. It was the most difficult period of my career. Testing protocols would change three to four times during your shift. It really challenged your commitment to medicine. For me, that’s what I signed up for,” she said, adding, “We knew what was going on, but the world didn’t. People who didn’t know were skeptical of our “Don’t Go Out” suggestions, etc. It was very scary. Many of my colleagues have retired because of this. I always wear scrubs, which I’ve never worn. I take another shower before going home.

Mary Kat is grateful to everyone for what they’ve done during this pandemic, she said.

“I’m proud of the people I’ve been around during the pandemic and the support everyone has given to doctors,” she said.

The pandemic isn’t the only challenge the mother and daughter have faced in their careers. More subtle, but often still just as pervasive, is people’s perception of what a doctor should look like.

“During my limited time practicing medicine, it’s not uncommon for me to walk into a room and introduce myself and hear the patient ask, ‘When am I going to see the doctor?'” said Mary Kat. “Female doctors are often seen as that. Medicine has adapted more to the presence of women in the field than when my mother went to school, but there is still a long way to go. Patients assume that a nurse is the doctor.

Kim was aware of this perception when she entered medicine and chose to address it early in her career.

“I made it a point not to look like a nurse. I went to work in a dress or a skirt so as not to be mistaken, ”she said. “Now, with the pandemic, this is the first time in my career that I’ve worn scrubs to work.”

When Kim started medical school, women made up only 25% of her class.

“I didn’t allow myself to focus on that,” Kim said. “I wanted to be a doctor. I didn’t distinguish myself as a woman. I thought that if I couldn’t keep in touch with my male counterparts, I wasn’t using the excuse of being a woman.

When it came time for Kim to choose medical school, she chose VCU School of Medicine because of its respect, she said.

“He was known for giving students the greatest clinical experience,” she said. “That’s where you went to become a doctor. I like the practical approach and the interaction with people.

Being at VCU showed her what it takes to be a doctor, she said.

“With VCU being in Richmond, it gives you the privilege of seeing a population that crosses all barriers,” she said. “You see the whole range. You are clinically participating in their care. VCU continues to train physicians who will take excellent patient care and that is the goal.

Harry Kraus, MD, a general surgeon at Hampton VA Medical Center, studied medicine with Kim for four years. They sat next to each other during the lectures. He liked her personality and her confidence.

“She was easy to love because she was easy to be around. She was practical, not one to require a lot of maintenance,” he said. “She cared about people. She was friendly and easy to talk to.

He instinctively knew she was on the right track for the right reasons, he said.

“She was in medicine because she was a good person and would dedicate her life to caring for others. She was all about other people,” he said. “As a mother, she always took care of her children and gave them a foundation to succeed in life.”

Luckily, Mary Kat and Kraus’ son were in the same class at VCU and graduated the same day.

“We have always had this special bond. She has always been like a mentor to me. Kim is brilliant. In medical school, I was always so impressed with his intelligence. She was friendly, compassionate and caring,” said Trefzger, whose daughter, Grace Mueller, MD, is a pediatric chief resident at VCU Pediatrics and another daughter, Anna Mueller, is in the nurse practitioner program at VCU. “Our families have a lot of parallels.”

Continuing a Legacy at VCU

Mary Kat remembers reading her acceptance letter from VCU while her family was having dinner at the Olive Garden restaurant.

“We screamed and we were all in tears,” she said, noting that she had applied to several medical schools. “I chose VCU because I like [that] VCU is so welcoming. I loved every clinical rotation I had, but realized that emergency medicine was what I wanted to do.

The involvement she had with VCU patients was a bonus.

“We were also able to care for veterans at Hunter Holmes McGuire VA Medical Center, which is close to my heart,” said Mary Kat. “One of my favorite classes was our class on how to be a doctor. It was led by doctors from all specialties. We talked about how to take care of the bed and how to bring the patient to trust you. VCU is doing a great job of producing this type of clinician because we need to have hands-on experience. We had an amazing simulation center as well as feedback. VCU is doing an amazing job. I’m so proud of VCU and my class. It produced very genuine and caring doctors.

Game day and graduation were memorable, she said.

“On the day of the match, my whole family was there, as well as the core of girls who studied medicine with me. The week before Match Day we went to Ireland for a 10 day road trip. We got our matching letters at the top of the Guinness Distillery and we all matched.

Aditi Sharma, MD, a researcher in micrographic surgery and dermatological oncology at the University of California, San Francisco, was one of Mary Kat’s traveling companions in Ireland.

“She has a heart of gold and an innate sense of kindness that she is always ready to support,” Sharma said of Mary Kat. “These qualities, combined with her meticulousness and drive for excellence, were the reasons why I was certain she would be the exceptional doctor she is today. We’ve been through life’s ups and downs together, and I can say with confidence that there’s no one I would rather have had by my side.

Due to her status as an alum, Kim was able to sit down with her daughter when Mary Kat graduated from VCU.

“I loved having my mom recognized with me,” Mary Kat said. “It was such a happy moment.”

Subscribe to VCU News at newsletter.vcu.edu and get selected stories, videos, photos, news clips and event listings delivered to your inbox.