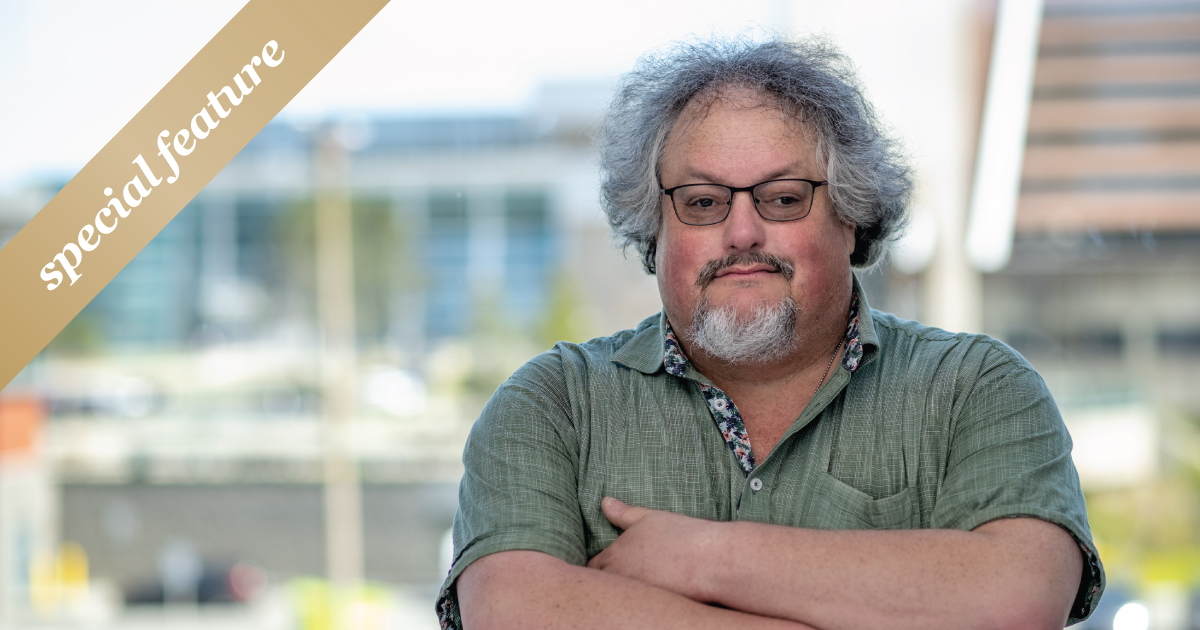 Part of a special feature celebrating and recognizing the Class of 2022 at Memorial.

Chris Gardner was diagnosed with a learning disability at a young age.

The diagnosis was associated with persistent mental health issues.

Yet he was undeterred from spending the next three decades challenging what he had been told were his limits.

Tonight, he will cross the stage at convocation in St. John’s to graduate with a Bachelor of Arts in History, with a minor in Political Science, as part of the class of 2022.

Mr. Gardner’s early years as a student were fraught with uncertainties and adverse experiences.

During his family’s three-year stay in Waterloo, Ontario, he changed schools three times.

After being poorly medicated for ADHD, his academic worries came to a head.

Combining this with the bullying of his classmates, Mr. Gardner struggled in school; therefore, he was retained in grades 7 and 8.

Nonetheless, he persevered and graduated from high school and then started his job at Memorial University as a cleaner in the facilities management department.

He is now an honored retiree after 31.5 years of dedicated service to the university.

Sometimes all you need is to believe

One summer of 1991, Mr. Gardner’s friend planted in his mind the idea of ​​going to post-secondary education.

That moment launched the next two decades of his academic journey, accompanied by a diagnosis that changed his life.

Mr. Gardner got in touch with Barbara Hopkins, then an associate professor in the Faculty of Education.

“Getting the right diagnosis was an eye opener for me.” —Chris Gardner

She helped him get a psychological evaluation before he started his studies, which allowed him to eventually be diagnosed with a learning disability and obtain the necessary accommodations. of the Blundon Center.

“Getting the correct diagnosis was an eye opener for me,” Gardner said. “It helped me understand why my experiences were what they were and it helped me and my counselors at the Blundon Center to better understand my needs.”

Always an avid reader, with a particular interest in history and geopolitical issues, he knew he wanted to study the arts.

He says John Greene and Jerry Gardner, two of his childhood history teachers, are the biggest influences in his life, helping him discover his passions and being unwavering supporters.

He also credits the many instructors at Memorial who helped him follow realistic timelines and study plans throughout his degree.

In addition, he took advantage of Memorial’s employee development program program; he sees this as crucial financial aid.

“My supervisors always processed the required paperwork on time and continued to accommodate and encourage me. They saw the potential and their reassurance made me believe I could do it,” Mr. Gardner said.

His peers say he is a kind and resilient person who genuinely cares about those around him.

“I remember when my father passed away…the first person I see at the funeral is Chris. He doesn’t drive, but he still made arrangements to be present there, all the way to Witless Bay,” said Lorna Yard, television producer at Memorial’s Center for Innovation in Teaching and Learning.

As Mr Gardner prepares to finally live the retirement dream and start ticking things off his to-do list, he would advise anyone struggling with mental health or school to ask help, no matter how hard and scary it is to take that first. step can be.

“You never know what you can do until you do it.”

Marium Oishee is the Student Life Marketing and Communications Advisor at Memorial. She can be reached at [email protected]