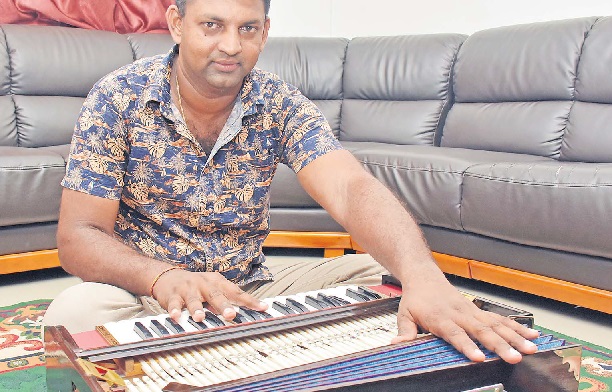 Patrick Prasad’s love for music started at an early age.

Prasad, reputed to be one of Fiji’s foremost bhajan singers, says his thirst for spiritual knowledge and traditional music has taken him far.

“I started singing the kirtan when I was in sixth grade in my mandali village, and at that time I didn’t even know how to play the harmonium,” he says.

“I used to hear his kirtan which came in tapes and write the lyrics down so I could memorize them,” Prasad says.

“Slowly I learned to play the harmonium with another artist named Ajendra Pandey.”

At 14, Prasad could read the holy book of Ramayana.

“At that time I only knew two or three bhajans and once again eminent bhajan singers started coming to our mandali, I took keen interest in learning more about bhajans,” recalls -he.

He says that when he started out as a bhajania, few people believed in him and he didn’t have many opportunities to show his growing talent.

Then he was introduced to the music of Michael Chand Mahabir.

“Once, as I was walking by a Procera Music outlet, I heard the legendary bhajania Michael Chand Mahabir.

“I quickly bought some of his tapes, went straight home and listened to them. But still, I had limited knowledge of the different styles and the correct order of chanting bhajans.

Prasad says that over time good word of mouth spread and people in his community and surrounding villages also learned that he can sing bhajans too.

“I even sang for free at many events to build my confidence and gain more experience,” he adds.

Along the way, he sang alongside another bhajan singer, Pundit Shiu Ram Sharma, who lived in Lautoka but was born in India.

“Pundit Sharma was very knowledgeable, and I couldn’t match his extensive knowledge of the various forms of vistaar bhajan.

“I stayed with him, and he gave me a lot of bhajan-related books to read. I owe him a lot for guiding me when I was nobody.

Prasad, who also claims to be a beneficiary of the knowledge of bhajania Satendra Kumar, has done many bhajan performances in Australia and New Zealand.

“I have a good knowledge of Hansa vistaar which describes the soul.”

Meanwhile, Prasad considers bhajan legend Ashok Kumar to be one of the best bhajan singers in the country.

“He is a legend and is highly respected in the bhajan fraternity because he always has such love and discipline towards bhajans.”

2022-02-24
Previous Post: The Day – Known for his passion for Coast Guard history and finding the unique, museum curator retires
Next Post: Viva Loans UK Review – Easy Loan When You Have Bad Credit