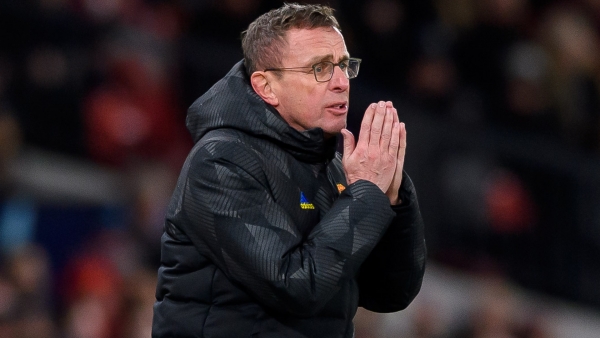 Ralf Rangnick has asked his Manchester United players to prove that they care and will not revert to their bad habits.

The interim manager demanded “passion, emotion and intensity” ahead of Monday’s FA Cup third round home game with Aston Villa, and admitted there were disgruntled players in the ranks of the Red Devils.

A sad home loss in the Premier League to Wolves halted early progress under Rangnick’s reign, and the German boss said on Friday it was “a step back … maybe a relapse “.

Rangnick inherited the job from Ole Gunnar Solskjaer, the club’s legend who was sacked once it became clear he couldn’t make the most of United’s talented and expensive players.

Now that is the challenge of the veteran former RB Leipzig boss, and he demanded the cooperation of the whole team.

“We have made progress, but obviously the game against Wolves was a step backwards, maybe even a relapse into the habits that the team has shown in the past,” Rangnick said during a press conference.

“We have to insist and stress every time we have to work together.”

He repeatedly stressed the search for a balance between defense and attack and called for a collective and spirited effort.

“We have to do it with passion, with emotion, with intensity,” Rangnick said.

“That was the problem against Wolves, especially in the first half when we were just escorting them. Only David de Gea objected to them going easily towards our goal.”

Rangnick said a “different performance” was imperative for the Villa game, and said he was convinced his players were making an effort to adhere to his methods.

“They’re at least trying, I’m sure they’re listening,” he said. “We have to and want to work with the players we have.

“We’ve shown that we can keep the sheets clean, but it’s also about what we do with and without the ball. Once we have the ball, it’s about making responsible decisions, making the right one. decision at the right time. “

Villa have lost their last six FA Cup games, their longest losing streak in the competition, while United have won their last nine home games in the tournament with an aggregate score of 20-2.

They are undefeated in their last 11 appearances at Old Trafford in the FA Cup since a 2-1 quarter-final loss to Arsenal in 2014-15.

Still, Villa have won in the league at United this season, so Rangnick is on his guard.

History tells us that there were only three opportunities for a team to win twice at United in the same season – Chelsea in 2004-05, Tottenham in 1989-90 and Villa itself in 1919. -20. Villa, now managed by former Liverpool skipper Steven Gerrard, would like to repeat the feat.

There have been rumors of discontent in United’s dressing room, often centering on Cristiano Ronaldo, with speculation he may be unhappy or that others will be disappointed with his status.

It’s unclear how true all of this is, and Rangnick says there are always players who are fed up with it.

“It’s not just a problem with a club like Manchester United. If you have that many players and only 10 outfielders can play and three can be substituted [onto the pitch], you have a number of players, in our case 12, 13, 14 players who aren’t even playing or even making the squad, “he said.

“These players are not happy with this situation, it’s obvious and it’s clear. I tend to explain to the players every two or three weeks why they don’t play, but obviously I can’t do it at every game. “

Some could move on during that transfer window or at the end of the season.

“We have players whose contracts expire this summer, maybe also one or two others who still want to leave, even if they are under contract,” Rangnick said.

“It’s a matter of the players handling this situation in a professional manner. If I find out that this is not the case, I will address it directly to the players.

“Everyone has the opportunity and the opportunity to practice to present themselves and have the chance to play. If not, the players, the club and the agents need to discuss the situation.”

2022-01-07
Previous Post: Siddhaanth: My passion for cricket has benefited me both …
Next Post: ‘West Side Story’ Star David Alvarez Brings New Passion to Bernardo