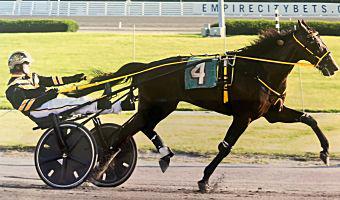 RIDGFIELD — Resident Scott Keppler, 55, is living the dream, because at this point in his life, he can.

Growing up, he attended Morrisville-Eaton High in Morrisville, NY, where he enjoyed playing football. But he also developed a passion for another sport: harness racing.

His father Richard Keppler, who died five years ago, owned and trained harness racing horses and introduced Scott to the sport. He learned to train and drive in races as a teenager, but quit the sport in 1986 to pursue a career in the software industry.

His passion for harness racing was rekindled thanks to the Internet.

“One day, out of the blue, I searched the internet to see if I could find anything about the harness racing industry,” Keppler said. “I was surprised to see great industry websites like ustrotting.com. I was reading all these articles about people I raced against as a kid or knew through my dad.

“It kind of brought me back to the ropes and I started following the sport regularly again.”

In 2020, with the support of his wife and two boys and the financial means to do so, he returns to harness racing to fulfill his childhood dream. He bought three trotters and returned to the sulky – the cart used in the sport – to drive his first race since 1986.

In 2020, he was winless in three starts in amateur division races at Yonkers Raceway in New York and Monticello Raceway in New Jersey with purses of up to $15,000. He won his first race of 2021 with his horse, Judge Ken, at Yonkers on August 6. Last year he had three wins, five second and three third place finishes and earned $29,960. In 2022, he has three wins, two second-place awards and a third-place finish in 15 starts for $12,663 in earnings.

“My first win coming back to the sport was special,” Keppler said. “But I have to be honest, I really enjoy every interaction I have with not only the racehorses, but also people in the industry.

“That’s another big part of the connection I have with the sport, the people. Some of the nicest people I’ve met are people who work in the horse industry. Colorful, generous and hardworking, these people remind me of where I grew up in the hills of central New York, I just like to talk with them and share a laugh or two.

Scott Keppler spent his early childhood in northern New Jersey until his father moved the family to upstate New York where they owned a 50-acre farm. It was there that Richard Keppler realized his own dream of owning and training a stable of harness racing horses at Vernon Downs in Vernon, NY Scott Keppler would help his father, first jogging with the horses at the age 10, then helping train them and began driving in state fair races in 1983 at age 16.

“Once I discovered the racing side, it was clearly the speed and the competition that was appealing,” Keppler said. “Working with the horses to compete at high speed really got me hooked.

These horses trot at speeds of over 30 miles per hour and you race up to seven or eight other horses in a race. It’s exhilarating when you think about it. I was hooked and all these years later, here I still have fun.“

As a youth, Keppler thought he would make a career out of harness racing. But after graduating from high school, reality set in. If he were to succeed in life, it wouldn’t be in harness racing. In 1986, at age 19, he drove his last race and moved on. As a driver from 1983 to 1986, in 29 total starts, he had three wins, two second and four third places, with $1,716 in earnings.

“When I realized harness racing wasn’t my thing, I went back to school, followed the Grateful Dead for a while and eventually got a BS (Bachelor of Science) in finance and an MBA in marketing,” said Keppler, who works from home from ServiceNow, a software company based in Santa Clara, Calif. “I got involved in the software industry and had the chance to work with some very successful companies.

“For a long time I was a professional guy with a great wife (Katie) and family and was thrilled to move to Ridgefield and continue raising our boys,” he said.

Along with Judge Ken, Keppler’s other two trotters are Lincoln Tunnel and Brilliant Bob. They compete in the North American Amateur Drivers Association Spring Series, a 10-race event with split races held in Yonkers and Monticello, Virginia. The fourth leg took place on Thursday and Keppler is looking for his first victory in the spring series. . Horses are awarded points based on order of finish and the top eight advance to the $15,000 purse final in Yonkers on May 19.

“My horses are stabled at Monticello,” Keppler said. “I use switch farms near there when I give them their regular breaks from the racetrack. I would love to find a farm near Ridgefield where I could keep them for a week or two so my wife and kids could spend more time with them.

“I love introducing people to these wonderful equine athletes. In my opinion, they are special and they usually leave a lasting impression on people.“

Keppler said he enjoys both training and driving the sport.

“I like to be hands-on and work with them as much as possible,” Keppler said. “These animals are the result of decades of fine breeding that allow them to perform at a high level.

“When you work with them you become teammates and when you win a race I think they feel the accomplishment as much as I do. It’s really something special.

When it comes to driving, training and owning his horses, it continues to be a learning experience for Keppler. But in the end, with the winnings he made in the races, he broke even with the cost of maintaining his three horses. The most important thing for him is that he has fun.

“With my family, my job and harness racing, I’m living my best life,” Keppler said. “When you have an interest in something, but it’s not part of your life, you have to give it a whirl and say ‘why not me.’ My dad taught me that.”