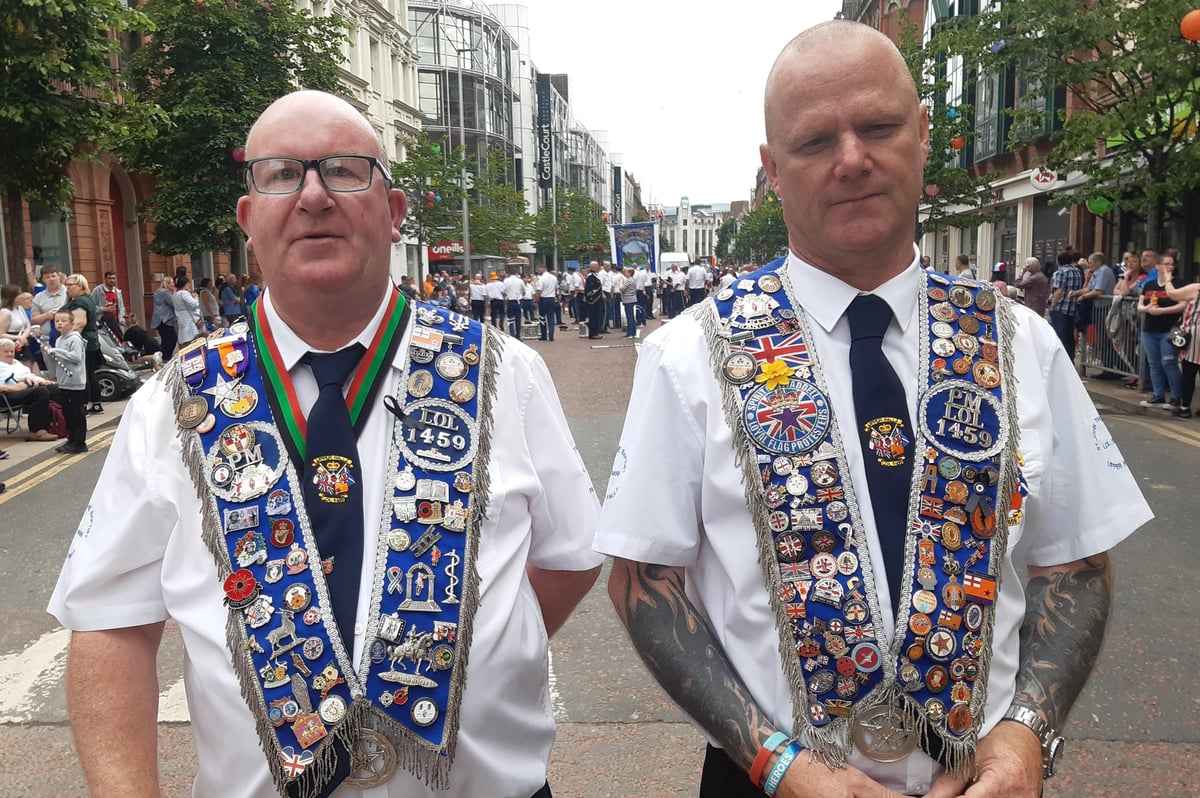 Twelfth 2022: All the pride, passion and fashion at Belfast’s massive Twelfth Parade

The crowds that gathered in the town center and the road out of town to Barnett Demesne’s pitch looked bigger than they did three years ago.

Also, the cheers seemed louder, the smiles bigger, and the hugs tighter than last time.

It’s the highlight of the walking season and its absence has rightly been felt, but at the same time, that same absence has made some hearts grow fonder.

Register to our daily newsletter

The Rathcoole Protestant Boys were one of several flute bands who were in exuberant form as they marched through Belfast city centre.

They even continued to march during one of the breaks in the parade, moving in a circular formation as they performed, much to the delight of the cheering multitudes of onlookers.

It was clear to see the passion of the bands and the pride on the faces of the Orangemen and women marching.

There were also a few fashion statements in the ranks.

One for the Future: Archie McMurtry

Shankill Old Boys impressed with their flat caps, white shirts and Peaky Blinders-style suspenders, as did The Billy Boys Flute Band with their smart red, white and blue sweaters.

A collection of orange bucket hats helped the men of LOL 903 stand out, though it was the orangewomen of two lodges in particular who really caught the eye with their coordinated efforts – one group wearing matching poppy dresses with red flower headdresses, and another group in red, white and blue dresses based on the Union Flag.

There was also plenty of red, white and blue clothing on display in the crowd, and another commonly worn item was the Glasgow Rangers orange shirt, which complemented the sashes of those marching.

Ray Burgess and Norman McCleery of Upper Falls LOL 1459 were proud to don their well-decorated scarves for yesterday’s parade.

May and her dog Lucy enjoying the parade in Belfast

Ray said he was thrilled he was back for a “full-scale” twelfth.

He said: “It feels like there are even more people than before.”

Norman added: “It’s so great to be back like before, it’s even more special to have been away for two years.”

Of his impressive collection of badges on his belt, he said, “I collected them for about 15 or 20 years.

“It’s full so when I get a new one I have to exchange it.

“You’ll be able to get a badge at most parades, they’re not too expensive, but when you have that many I wouldn’t like to know how much they cost.

“I had another belt full of badges, but I took it off and put it on and it disappeared.”

The weather provided perfect walking conditions for the Belfast route, not too hot and no heavy showers to speak of.

Still, you could see that some of the attendees were feeling the strain, which isn’t surprising on a six-mile ride.

While some had to travel by car due to the length of the march, one Orangeman found a happy medium by joining the parade on a three-wheeled scooter.

According to Orange Order County Grand Master Spencer Beattie, around 10,000 members of the organization and musicians and women took part in the march through Belfast.

There were many Scottish visitors with Banners and groups from Glasgow, Saltcoats and Stirling spotted between Belfast lodges.

Three-year-old Archie McMurtry was one of the musicians of the future who was singing a roadside tune.

Equipped with a miniature bass drum and a blue and orange feathered cap, he awaited the arrival of the Whiterock Flute Band in which his father Adam is a bassist.

Mum Jenny said: “It’s her third twelfth, but it’s the first with the drum.

“His dad doesn’t know he has this little drum so it’s going to be a surprise for him.

“Archie is having a great day, he loves watching the bands and he loves his new drum.”

Among those enjoying the parade downtown was May and her English Springer Spaniel Lucy, who wore a Union Flag dog coat.

May said: “I take her to twelfth every year.

“She pulls me after them. Sometimes she has a little dance.