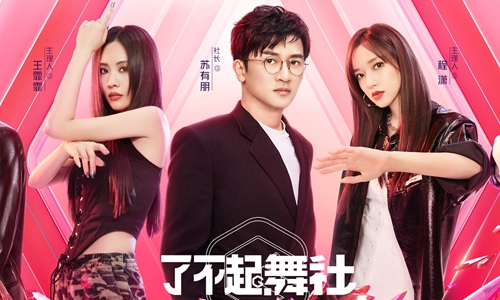 Wu Si, one of the Great Dance Crew contestants Photo: Courtesy of Youku

“This is what youth should look like,” many people commented after watching the first episode of the new show Great Dance Crew which debuted Saturday night on Chinese streaming site Youku.

The show, featuring Chinese stars Alec Su, Wang Feifei and Cheng Xiao as tutors, as well as foreign stars like Thai singer Chittaphon Leechaiyapornkul, known professionally as Ten, and Japanese dancer Uno Santa, better known as his stage name Santa, aims to discover promising young dancers among 60 young women and show the public their passion, their efforts and their friendship.

These women and tutors will work together to run a dance club to inspire others and pass on their joy and passion for the art form to others.

According to show director Lu Wei, many different dance styles will appear in the show because “each represents the kind of woman they want to be.”

“We help them discover their possibilities,” he said.

Saturday’s first episode, which became a hit on Chinese social media platforms like Sina Weibo and overseas on Twitter and YouTube, wowed audiences in a rich variety of dance styles ranging from hip-hop and street dancing to Chinese-style jazz as well as with dance battles between contestants and contestants against tutors.

Diversity is one of the most important elements for the director.

“It’s quite similar to when first-year students go to college to start a new period in their lives. Different paths make them discover differences, share and communicate,” he added.

The show focuses on how these people from diverse backgrounds find allies and mates. For the show’s contestants, the director said he hopes they can do something new that “people will enjoy but that I’ve never done before.”

Diversity was the main factor behind bringing in Ten and Santa, as they specialize in two very different types of dance.