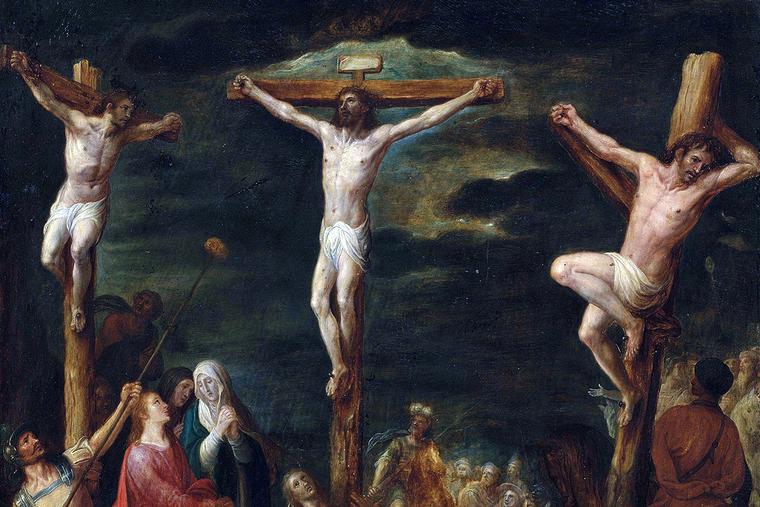 What Christ suffered in the Passion| National Catholic Registry

What could have caused Jesus the greatest physical pain during his passion? How did he suffer emotionally? How does his suffering relate to us today? During Holy Week and the Triduum, as we meditate on the passion of Christ, the faithful might have these and related questions about what Jesus endured for our salvation.

To help people better understand the suffering of Christ and how and why they can join their own suffering with that of Christ, in 2020 Dr. Thomas McGovern, dermatologist and surgeon, wrote What Christ Suffered: A Physician’s Journey Through Passion.

His expertise on the Passion is considered the most accurate and up-to-date understanding of what Jesus suffered. EWTN Radio listeners are already familiar with McGovern, who has been a regular co-host on Doctor, Doctor since 2019. He is also an advisor on the board of directors of the National Catholic Medical Association and a Knight of the Holy Sepulchre.

McGovern has made some important and startling discoveries during his years of research. His interest in the Passion began to take root while he was a medical student, and now, as a physician, he describes in detail the harrowing process of the crucifixion.

“The flogging was probably the greatest suffering,” he said in a Holy Week chat with the Register. A number of older writers get this part wrong in regards to the Roman scourging, such as saying there were pieces of bone on the flails. “The Romans used lead balls and pear-shaped pieces of lead,” McGovern said, explaining, “The ancient flagellum [a short whip] found in the catacombs have bronze metal handles,” and at the ends and along their leather straps were the bits of metal that struck the inflicted person. “It will hurt incredibly.”

McGovern described how a Roman soldier was on either side of Jesus, each with the flagellum. “The scratches came from both” – first one, then the other. “The evidence is there. There is no better explanation of the Shroud” [of Turin, which he definitely believes is the burial cloth of Jesus].

“There are more than 200 [marks] on the back and 160 on the chest, and that’s where the blood was drawn,” he said. There were many more plagues because “at first it softened the skin and bruised it”.

“Then came the bruises, which did not show [on the Shroud of Turin]. Only the places that were bleeding were showing. After repeated blows”, there could be open and bloody wounds. And blood would also be lost inside the body and contribute to “circulatory shock”.

McGovern also pointed out that the ribs are covered with a thin layer of skin and many sensitive nerves. Because severe pain increases oxygen consumption, breathing becomes rapid, and as the rib cage expands, encountering these sensitive nerves, it would cause excruciating pain.

“It becomes a double-edged sword,” he explained, adding that shallow breaths ease pain but decrease the oxygen the body needs. “You are starting to be in shock. Your body doesn’t have the blood it needs, and then you get dizzy because it’s harder to get blood to the brain. The body is forced to breathe faster or more deeply, which increases the unbearable pain.

At the same time, chest trauma also breaks small blood vessels in the lungs, and this blood enters the space between the lungs and the chest cavity. In addition to losing blood outside the body due to lacerations inflicted by the flagellummetal balls, there would be blood loss inside the body as well as outside the body.

McGovern pointed out that flogging was usually performed while the condemned were on their way to crucifixion. The fact that Jesus received such a severe scourging first suggests that Pilate wanted it to be his punishment, not crucifixion (Luke 23:16).

Then, in mockery of Jesus, McGovern drew particular attention to the Roman soldiers beating Jesus over the head with a reed (Mark 15:19; Matthew 27:30). Worshipers might imagine a palm branch or a thin piece of vegetation, the doctor said. But he corrects this impression: “The reed with which they struck him was not a fragile thing.” The Bible uses the word kalamo, identifying a reed that “grows 30 feet tall and is wooden, like bamboo. The reed is like a hard, heavy tail stick, or a bamboo stick. And when he strikes him on the head, the reed digs into the crown of thorns, causing excruciating pain. The crown of thorns covers his head [not like a circle but] like a cap.

Jesus had suffered horribly up to this point.

Unlike other reviews, McGovern studied the original sources, read everything from 300 BC on the crucifixion, and visited and studied in the Holy Land and elsewhere. In one case, after working with an expert in pulmonology and cardiology, he can refute the popular theory that Jesus died of suffocation, as French surgeon Pierre Barbet popularized in his book. A doctor at Calvary in the mid-1950s. Barbet based his theory on a torture used during World War I by the Germans called aufbinden, meaning “untie”. The victims’ wrists were tied behind their backs, a rope tied to a beam, and their feet lifted off the ground. These victims would call aufbinden because of the strain on their muscles and breathing. Within half an hour, the victims suffocated as their muscles froze in cramps. Barbet postulated that this torture reproduced the crucifixion.

McGovern refutes this theory in detail in his book, highlighting St. Luke’s Gospel account: “Jesus cried with a loud voice at the time of death” (Luke 23:46). McGovern recounted: “No one can scream if he chokes to death. If Jesus died of suffocation, how did he cry out, “Father, into your hands I commend my spirit? You can’t do these things if you’re choking.

Based on his extensive research, McGovern believes that traumatic shock was a primary factor in Jesus’ death.

Simply put, he had a major loss of fluids due to major external and internal bleeding on Good Friday from the severe flogging and beatings, including the night before. To the loss of liquids was added his profuse sweating. McGovern goes into great detail in his book, explaining how the probable cause of Jesus’ death was a fatal heartbeat. “An arrhythmia called ventricular tachycardia is the likely factor,” the doctor explained.

The contributing factors were therefore severe flogging and shock, he pointed out. McGovern clarifies that with this type of arrhythmia, Jesus would not have fainted. But as soon as his heart suddenly slowed, Jesus would know he was about to die, giving him time to speak.

Of course, there was great emotional pain that Jesus went through before, in the Garden of Gethsemane, McGovern explained. “Jesus said, ‘Father, let this cup pass away from me.’ He saw what was coming. It was scary, and he experienced it. However, during the agony, he “kissed” her.

McGovern shared the steps to embrace this essay, referring to Harvard psychiatrist Dr. Kevin Majeres, including the realization: “Jesus felt it so intensely that he bled from him as blood and sweat was coming out of his skin.” He ‘felt the anguish to the max’, as shown by ‘hemtidirosis’, an extremely rare condition of blood sweating, which can occur when a person is faced with death or other life-threatening stresses. . McGovern also described how when Jesus was arrested in the garden, unlike everyone else present, he was the only one “at complete peace, giving himself up in the serenity that is so wholly majestic.” He sees it with the eyes of the Father, sees the horrible anguish, and then he is ready to give himself completely. After the arrest, there is an incredible transformation. He does not answer ; he does not argue. Talk about gentleness, which is force under control, calm control! He could have had 12 legions of angels” but did not ask for them.

He gave himself completely out of love for us.

“People often ask, ‘Why am I in pain?’ continued McGovern. They ask questions such as, “Where is God in hungry children?” in the tragedy of September 11; in those who die and flee to Ukraine?

“There is no right answer. Looking at Christ on the cross, it starts to make sense,” the doctor said.

Looking at the Passion and Sufferings of Jesus, McGovern offers insights and advice, referencing the Apostolic Letter of Saint John Paul II Salvifici Doloris (The Christian meaning of human suffering). In part, the pope recalls that St. Paul wrote to the Colossians (1:24), “…and in my flesh I complete what is lacking in the afflictions of Christ for the good of his body, that is, the Church”. John Paul II explains: “Christ wants to unite himself with each individual, and in a particular way he unites himself with those who suffer. … For whoever suffers in union with Christ — just as the apostle Paul endures his “tribulations” in union with Christ — not only receives from Christ this strength already mentioned, but also “completes” by his suffering “what is lacking to the afflictions of Christ. .’… No man can add to it [the sufferings of Christ]. But at the same time, in the mystery of the Church as his Body, Christ has somehow opened up his own redemptive suffering to all human suffering. Insofar as man takes part in the sufferings of Christ – in any part of the world and at any time in history – insofar as he completes in his own way the suffering through which Christ accomplished the redemption of the world.

John Paul II adds: “Does this mean that the redemption brought about by Christ is not complete? No… the Redemption that has already been fully accomplished is, in a sense, constantly being accomplished.

Reflecting on the pope’s words, McGovern said that because Christ redeemed the human person through suffering, “we can also use our suffering to redeem other people. This is how we exercise our priesthood. I can offer my suffering for the salvation of another person. It affects eternity. Once we realize this, why wouldn’t we use this power? »

McGovern pointed out, “When we are hurting and don’t know what to do, one of the best things to do is look at Jesus on the cross. As Saint John Paul II says, “the meaning of suffering is redemption”.

2022-04-15
Previous Post: Good Friday: Bishop Perez will preside over the celebration of the Lord’s Passion at the Cathedral Basilica of Saints Peter and Paul
Next Post: Where to watch “The Passion of the Christ”