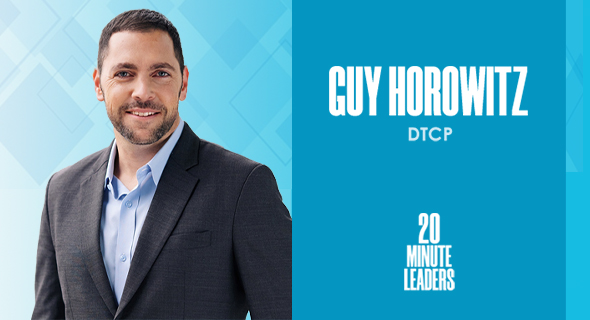 “You have to have that mixture of passion and something that comes from the soul rather than money.”

By: Vanessa D. Fast
In: Passion site
Tagged: united states
Working hard in a daily job and finding time to fulfill your passion is a balance that Guy Horowitz, Partner at DTCP, seeks to find. During the week, he participates in investments in late-stage enterprise SaaS companies at DTCP. On Sundays, he meets with other members of the tech and Israeli adventure scene in Silicon Valley to perform rock covers in Hebrew. Horowitz shares that product market fit is critical to both efforts. There aren’t many others who play Hebrew rock songs in the area, but there is a large audience that enjoys the music. On the investment side, many companies are neglecting the European market, for which the DTCP is well placed to support them. Horowitz says he’s a product guy, so he aims to deliver a unique, high-quality product to their clients, which are the startups they work with.

Guy, tell me a bit about yourself.

I was born and raised in Israel. I spent a few years here in the United States and returned to do my military service in Israel. Life decided for me that I was going to stay in Israel. I was part of a startup in 98. I was mainly doing WhatsApp. The app world didn’t exist back then, so we had to sell to operators. I learned that you don’t want to work with carriers. In 2004, I joined a large VC in Israel called Gemini. I also worked for Microsoft for a short while.

Take me to the 90s in the tech ecosystem. It’s my life now. This is what surrounds me. This is what is sexy. Was it the same feeling then?

I started university in 1992 and we had computers everywhere. Then I went to do my military service where we had no computer. After that, I felt like I missed the train. Everyone was already literate and I was illiterate. I think everyone felt like this thing was going to change the world. But not necessarily in the same way as we think today.

During my first startup, we did e-learning directly with consumers. We ended up selling this to a B2B type entity. The world has taken on the B2B turn, and I was just there at the right time.

In 2012, I ran a local outpost for a German company called Deutsche Telekom. We had R&D we had commercial development. There was a bit of adventure. I was frustrated. I expressed these frustrations to the CEO of Deutsche Telekom. Fortunately, someone else in the organization was on the same line. We ended up doing this thing called DTCP, which is now a multi-LP fund.

Before I get into what you do with DTCP, tell me about your work as an artist and musician.

It is first and foremost an outlet. For anyone who works in tech or business, you need to have something that isn’t just racing. We need to relax and unwind. I’m in an Israeli band in Silicon Valley. We’re all technicians and companies, and we get together on Sundays to do rock covers.

This is actually the market for products worthy of blankets. Mostly Israeli covers in Silicon Valley. We found this thing that people want to listen to. There isn’t a lot of rock in Silicon Valley that sings in Hebrew.

In fact, there are a lot of great singer-songwriters who don’t make it into prime time to become music unicorns. Sometimes the fit with the product market is as important, if not more, than being that singular shining snowflake.

Tell me a bit about this sense of accomplishment.

I think it’s a question of balance. First, there is a day job and you have to devote yourself to it. But you have to have that mix of passion and something that comes from the soul rather than just the money side. I think this is true for every startup and in venture capital.

For me personally, in COVID, it was also a revelation. There is social media where you can actually reach people. Receiving those calls and messages from people is actually almost as satisfying and rewarding, especially if you have a high paying day job.

Tell me a bit about DTCP. How do you think in the world of investing today?

We started in 2015. Our thesis has always been enterprise SaaS. We started with the omni-stage and gradually moved on to the final stages. The world has also gone in a different direction than we thought. Companies that have great units of measure, great KPIs, as one of the main criteria, are actually going to outperform everyone. As investors, we want to be there. If you take a look at our portfolio today, we are very focused on KPIs and metrics. We have built an analysis tool and platform that allows us to basically pick the top of the crop. We will not be able to invest in all of them. But if we are able to invest in any of them, it will do a lot better than your average agree plus business.

How far do you go, both to establish the relationship and to have enough time to analyze it?

It gets harder and harder and you have to start looking like everyone else earlier. We start talking to these companies earlier. Once you have four or five quarters of growth under your belt, this is where our tools work best.

Your value creation team is probably the most important team in your organization because it is a differentiator. It’s the secret sauce. Many of these companies, both in Israel and here in the United States, are lacking in Europe. They don’t have the capacity to know when is the right time to go to Europe.

Also in Europe, when you have a French business, they don’t know Germany as well as you might think. Everyone sees their own world and the United States

We have managed to find that happy place where our investors, LPs and their network and constituents are our best friends when it comes to bringing their businesses to market and helping them lubricate the processes that typically take years. and different languages ​​in different geographic areas. We help with that.

Many entrepreneurs realize that the European market has been neglected. Many CEOs and CROs in our portfolio haven’t spent a lot of time thinking about Europe. This is how we create and manage a conversation at a very early stage, even if we don’t invest at this stage.

What is the initial welcome that the founders can have?

Not all have the same welcome. But a typical entrepreneur would probably say, “Oh, the name rings a bell.”

I think we’re still affiliated in people’s minds with Germany, which isn’t bad. It reminds people that we are different and that you may be able to provide strategic value. Think about it, as an entrepreneur, “Am I strategic for you? “They say:” My strategy is to develop in Europe. You help me with that, so you are strategic for me.

The other thing is obviously the money. We are able to write bigger and bigger checks. Being able to get a double-digit check for a million from a strategic investor who helps you with something different is unique.

There are so many different things you do. Which part really resonates with Guy Horowitz?

The original Guy Horowitz is a product guy. For me, if we offer a product to the customers, which are the startups, that is unique and of quality and in a consistent way, we will do well. Where we excel is where we bring unique value. It’s around this ability to go into the market and touch it in a different way. This is our suitability for the product market.

In college or elementary school, what really piqued your curiosity?

I am a failed architect or an automotive designer. People who remember me from that time remember that my notes were filled with all kinds of drawings. Every building, every car, anything like a combination of art and science, engineering meets art, it makes me want to do it.

If I were to ask any of your partners, group members, or entrepreneurs who Guy Horowitz is, what do you think they would say?

Dreamer. Keeping my dream alive while doing all of these brick and mortar things, bread and butter. I think dreaming is a very big part of who I am.

Michael Matias, Forbes 30 Under 30, is the author of Age is Only an Int: Lessons I Learned as a Young Entrepreneur. He studies artificial intelligence at Stanford University, is Venture Partner at J-Ventures and was an engineer at Hippo Insurance. Matias previously served as an Officer in Unit 8200. 20MinuteLeaders is a tech entrepreneurship interview series featuring one-on-one interviews with fascinating founders, innovators and thought leaders sharing their backgrounds and experiences.